A solid team performance secured 30 points and a home win for Preston. On winning the toss, skipper David Fleckney elected to have a bowl on a good wicket in fine batting conditions where 200 looked a par score.

Finchleians made a steady start before veteran Mark Waters trapped their captain Rachit Thakkar in front with the score at 24 in the ninth over. Seb Walton-Adams, bowling very well in partnership with Waters, then took the edge of Divyesh Depala for Jack Stevens to take a tidy catch at first slip. James Stevens then bowled a sharp 6 over spell, taking the wicket of Chetan Depala LBW with his first delivery.

With little intent being showed by the visitors, spin duo Max Anderson (2-28) and Peter Murrell (4-28) settled in. Something had to give and at 100 for 4 with overs running out, Finchleians went on the boundary hunt. Eleven overs later they were all out for 140, losing their last 6 wickets for 40.

Preston’s reply started strongly before Aussie Justin Powick was unluckily run out at the non strikers end to the delight of the excitable fielding side. Jack Stevens then joined his twin brother James at the crease but left shortly after, adjudged LBW. Will Gallimore also failed and Preston looked a little wobbly at 41-3. Ben Hill then put 38 on for the fourth wicket with Stevens (40) before the third LBW in a row left Preston 79 for 4. Skipper David Fleckney then laid anchor and admired a fluent half century from keeper Hill (59*) as the pair saw the side home with a 64 run partnership to win the game by six wickets.

Preston 2s completed a comfortable 8-wicket win at neighbours Hitchin on Saturday moving into the top half of Herts League Division 5A.

Having been asked to bat first, Hitchin made a solid start through Chris and Matt Maylin, reaching 36 before the introduction of occasional seamer Callum Blair to partner the economical Ollie Gallimore. Blair soon wobbled the ball enough to bowl numbers 2 and 3, before perhaps the crucial moment of the match when keeper Liam Kenna produced a very sharp leg-side stumping to remove Maylin Senior, the matchwinner for Hitchin in the first fixture between the sides earlier in the summer. His 28 was to prove top score this time around too as the Hitchin middle order tried to hit its way out of trouble only to fall to the introduction of skipper Ashley Catlin (4-18) and the perseverance of Blair (3-26 from 15). Hitchin’s last four wickets fell for 5 runs as Preston, despite a depleted bowling line-up and benign conditions, restricted Hitchin to 149 all out in the 48th over.

In reply, Chris Cole, returning to open the innings, was soon out caught behind down the leg side, bringing the determined Alf Rehman to the crease. Rehman (28 not out) provided the backbone to the Preston innings with the main body formed by the in-form Tom Lincoln (53) and Dan Plumb (62 not out). Lincoln, knocking hard on the 1st team selectors’ door, mixed careful shot selection with some booming drives to make a run-a-ball half century and by the time he was removed by Nathan Page (1-15) the back of the Hitchin bowling had been broken. Enter Plumb to entertain the sun-kissed spectators with an array of shots on both sides of the wicket, including one sweetly-timed on drive that rivalled the Kenna stumping for the game’s champagne moment.

Preston emerged clear winners but will face a stiffer task at West Herts next Saturday as they look for a third consecutive victory in a steadily improving season where much improved outfielding and batting solidity, added to economical bowling, leaves them looking more closely at the league’s top two positions than the bottom two.

Preston 3rds completed another victory in Div 10B, this time defeating Hertingfordbury 2nds by 6 wickets at Whitwell. The visitors elected to bat first, but fine bowling by Iain Purton and Tom Mercer kept them on a tight leash. Some of the batsmen found Mercer’s pace and bounce a little disconcerting as he finished a 15 over spell with 3 wickets, but it was Iain Williamson, coming on at first change, who took the honours with 5 for 15 in 8.4 overs. 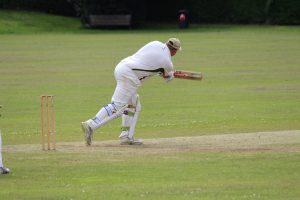 Richard Gatehouse works one to leg against Hertingfordbury at Whitwell

Bury were dismissed for 89 in just 32.4 overs, and with tea not yet ready, Preston set off immediately in pursuit of the total. However, their regular anchor Matt Burleigh was dismissed first ball of the innings by a swinging yorker, and with Will Mercer also falling shortly after, Preston were wobbling at 5 for 2. George Constantinidi (26) and debutant Dean Johnson (19) settled the home sides’ nerves before George was dismissed on the last ball before tea, picking out deep square leg rather too precisely.

After the break, skipper Richard Gatehouse and Greig Hearne wasted no time in knocking off the remaining runs with some powerful drives and a couple of lofted sixes, to bring Preston the victory in just the 22nd over.

With Broxbourne 4ths having withdrawn from the league, and once the points table is recalculated, the Thirds should now move into 2nd place and the promotion positions. All to play for in the rest of the season!

A depleted Preston 4ths found they could only take nine men to Potters Bar on Saturday, and not suprisingly were well beaten. Eight batting points were at least obtained with a score of 155, thanks to 33 from Tom Maxwell, 29 from Graham Hull, and 22 from David Ogden. Neil Pomeroy declared himself unfit to field so then there were only eight left, giving the home side an easy 9 wicket win. 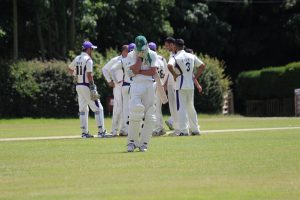 That sinking feeling for Liam Kenna against Queens Park

Preston’s topsy turvey inaugural season in the Beds County League continued on Sunday with a comprehensive defeat by Queens Park. Preston had high hopes after defeating their visitors in their first meeting back in May, but despite 50 from Justin Powick, Preston were dismissed for a paltry 116 on a hot afternoon at the Field of Dreams. Queens Park knocked off the target in just 20 overs, and the least said the better.

Preston’s Sunday 2nd XI made only its second appearance of the season, travelling the short distance through the country lanes to Lilley, to continue a village cricket rivalry that dates back to the 19th century. Preston fielded a blended mix of 1s, 3s and 4s and a couple of younger faces. 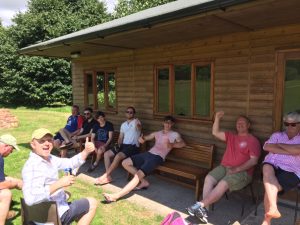 The Sunday 2nds relax before their match at Lilley

With the Sun finally beating down, and overlooked by the medieval church in a picture postcard village cricket setting, Lilley opted to send Preston into bat on a track that suggested some movement. After a couple of sixes lofted over the short straight boundaries by skipper David Fleckney, Preston had high hopes of a big score. But the innings didn’t get off to a flyer, as Lilley’s openers Ashby and McLaughlin bowled some tight lines and Preston stalwart Matt Burleigh was caught behind the wicket for just 2. Fleckney worked his way up to 23 before also being caught.

Will Mercer looked good, finding the pace of the wicket from ball one but also went for one that wasn’t quite there and fell for 13. Young Tom O’Reilly, playing one of his last games for the Club, saw off some straight bowling but eventually was cleaned up for 1. The Preston side was starting to make a bit of a hash of it.

Enter Chairman Paul Constantinidi (33), who steadied the ship in the middle order and gave loose deliveries off the change bowlers The Full Treatment. Will Gallimore and Tom Mercer failed to use much of the scorer’s pencil but gave the opportunity for student Dave Ogden the chance to really step up.

To say Ogden impressed was an under-statement. Looking relaxed against some straight balls and driving nicely. It was his six’s off the back foot over extra cover, and one huge hit miles back over mid-on into the surrounding paddocks, that stunned the crowd – with literally cakes falling out of mouths and drink being poured into one’s lap. Mark Waters helped with 16 in 3 scoring shots (6,4,6), and number 11 Mark Smith hung around long enough for Oggie (31*) to lift the score to 156 off 31 overs.

Something to bowl at and Oggie’s runs proved to be invaluable.

After tea, Rupert Bruce opened the bowling with a no ball after failing to notify the umpire of his bowling style (slow, lofted), but then he picked up an early wicket from a stumping by Will Gallimore. However, Lilley got off to a great start with Rasa in particular taking a liking to Preston’s attack, leaving Preston to wonder whether an early pint in the Liiley Arms was on offer. No. 3 McLaughlin also looked dangerous with punchy shots full of intent, but he then don’t quite get hold of one and was caught by Fleckney off Tom Mercer.

Skipper Fleckney’s competitive juices were now flowing and after a faltering start he picked up wickets to peg back the Lilley reply, finishing up with a tidy 4-33, with Smudger supporting with his Cobras from the other end. Smudger’s pace was such that a nick to second slip was smartly taken by wicket-keeper Gallimore wandering around with time to spare. Waters and Chairman Paul also tightened up the final overs to see Preston, after what was a shaky start, bowl Lilley out for 127 to take home the glory to the Red Lion.

A great game and one that gives the opportunity for the club to mix and members to play alongside others that they might not otherwise get the chance to. It’s also a great platform for players in the lower sides to shine and impress some of the other, more senior members of the Club. Lots of positives – but Oggie’s knock of 31, and young Tom’s gutsy fielding on the drives being particularly pleasing.

A really enjoyable fixture once again against a good, friendly welcoming Lilley CC. A superb tea it has to be said and beers and ciders were enjoyed in the garden of the Lilley Arms. We look forward to the return fixture at the Field of Dreams in September.