The 1sts plucked victory from the brink of defeat, while Casey Hughes and Andy Riant’s record-breaking 9th wicket partnership was the highlight of a bizarre drawn game for the 2nds.

Preston were fortunate to come away with an important and unexpected victory over visitors Holtwhites Trinibis, in what was otherwise a rather poor all round performance.

Batting first, Preston were bowled out in the final over of their innings for a well below par 167, despite opener Warren Hearne (67) and in-form Jack Stevens (34) earlier laying a good platform for a score in excess of 200. A mixture of poor shot selection and some good bowling from the visitors saw Preston lose their last 6 wickets for just 11 runs.

Holtwhites set about the run chase in their usual flamboyant fashion, reaching 90 without loss by the 10th over, with both openers taking a particular liking to the pace of Sam Crea. The game turned on its head after the introduction of slow bowlers Max Anderson (2 for 40), Pete Murrell (4 for 32) and David Fleckney (3 for 28). The visitors struggled to contain their aggressive intent, with a number losing their wickets playing poor shots. This hari kari approach to batting suddenly put Preston in a winning position.
It was left to Murrell to run out the number 11 in bizarre circumstances and to secure victory for Preston in a game they should have never won, as Holtwhites were dismissed in the 35th over for 156.

Preston 2nds made the short journey to the other side of Luton to take on fellow Div 5A strugglers Flamstead in what proved to be an incredible “game of two halves”.

Preston soon had cause to question their decision to bat first, as the ball nibbled around in the air and off the pitch, together with some variable bounce. After Matt Burleigh was LBW to one that kept low, fellow opener Chris Cole was bowled off the inside edge by another that nipped back a long way off the seam. Despite the testing conditions, Ashley Catlin (25) and Richard Gatehouse (33) scored quickly, taking the total to 90 for 2, before they fell in successive balls, Catlin caught at slip as one bounced off a length. The middle order then collapsed in the face of aggressive Flamstead bowling, and at 121 for 8 the game seemed up.

But Casey Hughes and Andy Riant had other ideas. Fighting back with an array of shots, they quickly tamed the Flamstead attack. With the Sun blazing down, the life seemed to evaporate from the pitch and the duo took full advantage. 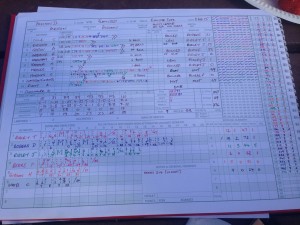 Hughes raced past 50, and the total passed 200, as the rest of the team rubbed their eyes at reaching previously undreamt of heights. Skipper Catlin didn’t know whether to declare or continue, and in the end Hughes was given time to complete his hundred. Two were required from the final ball of the innings but sadly he was run out for 99 going for the second. Riant finished on 65 not out and their partnership of 155 for the 9th wicket is a club record for any XI by some distance.

With the pitch now almost completely benign, Preston’s bowlers struggled to make inroads, although Ollie Gallimore took one of the openers, caught behind by Cole standing up to the wicket. Preston’s total of 276 for 9 looked in danger for some time, as Flamstead batted with ease and reached 180 before losing their third wicket to an excellent stumping by Cole off Catlin. At that point, well over 300 runs had been scored for the loss of 4 wickets since Preston had been 121 for 8. Thereafter, the Flamstead run chase was halted as they lost wickets and slow bowlers Riant and Catlin kept a tighter lid on proceedings. Flamstead finished their innings at 210 for 7, honours pretty much even (Preston 17 points, Flamstead 19).

The 3rds had a victory by default as Broxbourne sadly could not raise a side.

Preston 4ths had a disappointing 5 wicket defeat at struggling Wormley 2nds. Having decided to take first knock, 180 for 8 was posted thanks mainly to Peter Robbins (51) and 31 from Dave Saunders. The home team lost early wickets which were shared but with one very capable batsman and some good young eyes the hosts got home with ease. Never-the-less, Preston climbed a place in the table having taken 15 points from the defeat.

Stanmore’s participation in the Middlesex Cup quarter-final meant Preston took on their Sunday XI at the neutral venue of Northwood Town. Despite the odd hangover among the players, Preston bowled and fielded well to dismiss Stanmore for 135. Ollie Gallimore took 4 for 45 from his 10 overs, and should have had a fifth but *insert name of left arm spinner* dropped the chance at slip. Seb Walton-Adams, in his first game of cricket in 2015 after returning from his travels, also bowled excellently with his usual pace to take 3 for 34.

Preston lost Will Mercer early on but Matt Burleigh (48) and Sam Crea (63 not out) struck their second century partnership of the week to take Preston to the brink of victory, before Callum Blair helped finish things in just the 30th over.