Here’s a wrap up of the Under 14’s 2017 season which drew to close last weekend. We managed to play 9 games in all, winning five (incl Hoddesdon game), losing four and one rained off, which overall was a creditable performance in a fairly even league. Our aim this year was to get everybody involved, mixing up the batting order and bowling each player, which was in contrast to the other teams who bowled and batted their best players (usually the same boys) whilst the others just fielded. I think we got that right as we developed a really good team spirit through the season and all were involved throughout the games.

Our fielding improved throughout the season with some stunning catches by Guy (Braughing), Shaan (Braughing) springing to mind, a direct run out by Dan as well as Ewan’s three catches x same player x same position (Hatfield Hyde). We worked a lot on field setting at the Sunday training sessions and on identifying a batsman’s preferred shots, this paid off in the later games and was well marshalled by captain Louis.
Our bowling was a little inconsistent but Rhys, Louis and Ollie M worked up some good pace and Shaan and Josh impressed with their accuracy. Billy was busy behind the stumps doing well to restrict the byes and take a couple of catches and a stumping.

There were some fine individual batting performances with Rhys, Alex, Ollie C and Guy all hitting maximums of 25 and retiring. Billy became an opening batsman and got the team off to flying starts against Hatfield Hyde and Braughing and Dan and Tom showed the value of a good defence, adding some valuable late order runs.

The final league table is below, you’ll see that we finished third although the last game at Hatfield Hyde was perhaps a game we should have won and would have put us into second place. Braughing were deserved winners and were the best all round team we played.

Overall:
A really enjoyable season with great commitment and spirit from the lads and contributions from everybody. Well done all.

Thanks:
To the parents for their support and logistical skills in getting the lads to games despite school matches, after school activities, traffic delays etc. etc.
To the ground crew at Preston, Calum and Pete, who worked hard to prepare pitches of varying lengths for the 25 junior home games this season.

Have a great summer, looking forward to doing it all again next April!
Best wishes
Nigel 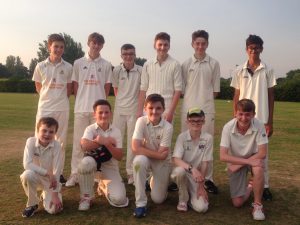 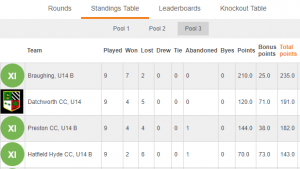