Preston travelled to Old Owens on Saturday for their second encounter of the 2015 season. Skipper David Fleckney won the toss and decided to take the first knock on a dry pitch, but Preston were very soon in big trouble. Reliable opener Warren Hearne got a snorter from Owen’s fast bowler Lane and was snaffled in the slips for 0, and fellow opener Will Gallimore also went shortly after for 0. When No. 3 Jack Stevens wafted at a delivery that went through the surface, ballooned and was caught behind, the Preston innings was in serious trouble at 18 for 4.

Against tight bowling from Owen’s Lane (4 for 15), Bloxham (2 for 15) and Mohammed (3 for 33), only Pete Murrell, who worked very hard for 22, and Skipper Fleckney, who led from the front of a rapidly sinking ship to be left stranded on 44, ever really got their heads round the game. Old Owens bowled and fielded impressively on a wicket that proved to be a handful with several deliveries disturbing the dry surface and popping off a length. Preston failed with the bat and closed their innings on 102 all out in the 51st over.

Old Owens openers Lane and Mohammed were caused some early issues, pitch assisted, by the Preston openers Sam Crea and Mark Waters but in reality the result was never in doubt. Owens’ batsmen quickly took the game with Lane hitting the ball hard to finish on a rapid 45 and the more conservative and sensible Mohammed tickling around for 31 not out. Only Max Anderson and Henry Morecroft took away a wicket apiece but Old Owens crossed the line within 24 overs to finish the game on 103 for 2.

This was a disappointing, lazy display from a strong Preston side and with the last half the season shaping up to be a tight battle, we need to dig very deep to get us in the top half now. We must not constantly rely on our team-mates to dig us out of a hole. We need to be very selfish and to stand up and not get wrapped up in our own frustration, blame less than fantastic wickets, or stupid things on opposition websites and just play the game of cricket as we all know we can. Some players really now need to come to the party; no-one is safe to play at this level and positive attitudes and the right hunger may sneak ahead of someone resting on laurels of past glories. Time to man-up.

Preston 2s enjoyed a thrilling game against West Herts 2s at home. Put into bat on a slow wicket that gave the bowlers a little movement, Preston made a cautious start before Casey Walker (40) injected some energy into the innings in a partnership of 70 with Matt Burleigh (30). However, West Herts’ bowlers kept a tight reign on Preston’s batting throughout, helped by some excellent fielding. Ashley Catlin (25 not out) tried to up the tempo late on but Preston had to be satisfied with 166 for 6 after their 53 overs.

Preston’s Casey Hughes gave the hosts early hopes with two quick wickets and an excellent catch at fine leg, before a big partnership looked to take West Herts to an easy win. Then, from 118 for 3 West Herts collapsed as the returning Hughes (5 for 36 from 15 overs) created panic in the visitors’ batting. After skipper Catlin took the 9th wicket, West Herts needed 9 from the final over. But courageous slog sweeps for 4 and 6 meant Preston lost out with just 3 balls remaining.

John Garnham’s Barmy Army travelled to division leaders Watford Town 3rds expecting a tough game against a side that is probably several divisions below where they belong. For some of Preston’s players it was a case of deja vue after last week’s 2nd XI fixture there….

Ollie Gallimore starred with the ball, taking 3 wickets in 14 tidy overs as Watford still managed to set a tough total of 223, all out off the last ball of their 53 overs.

In response, Andrew Hedges led Preston’s batting with 60 but there were useful contributions throughout the order including a 30 from Richard Gatehouse. Preston’s strongest batting line-up of the season couldn’t quite overhaul Watford’s total, but were happy enough securing the draw and 18 bonus points at 193 for 7.

Northants Exiles 3’s elected to bat on winning the toss at Hitchin Boys on Saturday, and they posted 190 for 6 from their 47 overs, Terry Neale and Bob Hearne getting 2 wickets apiece.In reply another solid knock of 45 from Peter Robbins and also 45 from Paul Constintinidi led the way for Preston. Alas, they finished 11 runs short with 6 down to draw the game, both teams taking a creditable 16 points from the match.

Muzza took a strong side over to Cheshunt on Sunday and discovered the continuing problem of Sunday Friendly cricket as the opposition could only field a relatively weak outfit. Sam Crea terrified the opposition openers like Mitchell Johnson presented with a trio of Lyth, Ballance and Bell, and promptly asked to be removed from the attack. If only Big Mitch was similarly generous. “Krony” Gallimore and Smudger then got among the wickets as Muzza’s attempts to open up the game came to nought, and Cheshunt collapsed to 65 all out.

Max Anderson then took the opportunity for some slogging practice, making 49 as Preston rapidly overhauled the small target.

Back to Chess Valley League cricket next week with a visit to Kings Langley, and hopefully we’ll be able to put together another strong side.

Preston 2s played Bayford/Herford’s Sunday side in a “Development XI” game. The start was slightly delayed so it was agreed to play 35 overs a side.

Preston fielded a mixed team with some familiar current faces, a Vice President and ex-player with his son, and some of the younger members of Preston’s ranks.

With the less than ideal news of Bayford only coming with 8 players (understandably a little with the state of Sunday cricket), Preston helped out and thanks to everyone who did more than was expected during the game – such as playing for the opposition (Wiggy) and fielding twice (Oggie / Cal) and umpiring most of the afternoon (Macca and Big Dave).

Anyway, we got a game on. 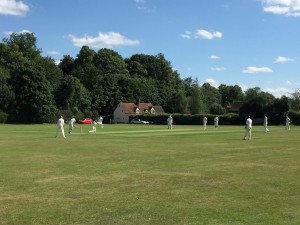 The Moretti brothers batting at the Field of Dream on Sunday

Fleckers was inserted and asked Brothers Waters to opening the Preston account. Rather surprisingly it all went to plan with both Vice-President Richard Waters and Preston regular Mark reaching 50’s quite quickly and putting on 125 for the first wicket. With both players trying to let some others have a go, Richard fell first and enter young Taylor Moretti who stuck around and soon looked quite comfortable against B/H’s bowling to reach only 7 but he hung around for around 30 minutes or so. 11 year old Ben Waters was caught cheaply, Blair reversed swept to be caught behind, young Brad Moretti schmooed a 4 before being caught. Enter veterans Fleckney and Gatehouse put on 40 odd at the end, with Fleckers ending up on 32 and Big Richy G on 10. Preston ended up on 207 off 35. B/H’s interesting Greenslade finishing up with a rather surprising 5-58.

Preston opened up their attack with Oggie and Macca. Ogden started to find some line and length for once and Macca picked up a wicket. It was however the encouraging introduction of young bowlers Brad Moretti, Taylor Moretti and Ben Waters that really lit the game up with some really good, straight bowling for their ages with Brad clean bowling the B/H No 4 and Ben having one well caught by a slumbering Maxwell at Mid-Off.

Wiggy, playing for the opposition, batted well and by mistake nearly got a century before being caught in the deep by a surprised Waters (M), off Blair for 92. His knock really created the spine of the B/H innings ironically with only two others reaching 20s. The B/H innings finished on 183, with Skipper Fleckney casting a few worried looks towards the score box in the final few overs, to bring a really enjoyable victory to Preston.

Thanks again to everyone – Gail especially for providing a last minute but fab tea. It also proves with some hard work, we can get some really encouraging games of cricket happening for the Sunday 2s to bring on our younger players but can also give some of our seniors the chance to have a more relaxed game and get some runs…some of us could do with the practice but it understandably needs some commitment from the senior players so, again, big thanks to All. 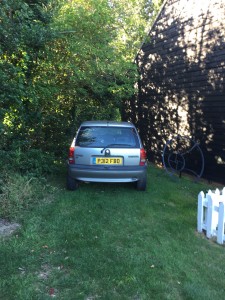