Three crushing wins for PCC in the Herts League

Preston enjoyed a fantastic Saturday in the Saracen’s Herts League, with their first three elevens enjoying crushing victories, while the fourths narrowly failed to force victory in a drawn game.

A totally dominant performance from Preston saw them convincingly defeat Redbourn by 8 wickets in Herts Division 2 on Saturday. 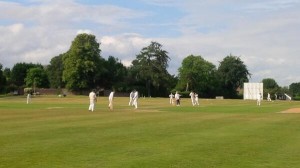 Preston batting their way to a convincing victory at Redbourn

After winning the toss and electing to bowl first, Henry Morecroft picked up a plumb LBW with his first delivery of the innings to set the tone for the rest of the game. In a stunning spell of 17 overs, 5 for 33 Morecroft, in tandem with James Stevens (2 for 10 in 11 overs), bowled beautifully to reduce Redbourn to 29 for 6 by the 15th over. A brief flurry of late order runs saw the hosts slightly recover, until the introduction of left arm spinner Max Anderson, whose 3 for 16 finally dismissed Redbourn for a measly 75 all out in the 36th over.

Preston set about their run chase in confident fashion with James Stevens yet again showing his class with a well constructed 43 not out, ably supported by brother Jack (15) and the evergreen Dave Fleckney (14*). Preston reached their victory target for the loss of 2 wickets in the 18th over.

Preston 2nd XI openers Barry Turner and Adam Shelley put together an opening stand of over 150 as Bentley Heath were put to the sword at the Recreation Ground. Shelley eventually fell for 91, and Turner 77, as Preston declared on 204 for 3 after just 39 overs. Andy Riant then took 4 for 50 as Preston’s bowlers steadily worked their way through Heath’s batting, finally dismissing the visitors for 137.

A strong Preston 3rd XI dismissed bottom of the table Hoddesdon 3rds for just 116 at Hitchin Boys School. Finlay Connah destroyed Hoddesdon’s top order, taking 5 for 24 with bowling that was too quick for the opposition, helped by some excellent slip catching from Martin Pierce and Dave Allen, together with the alert keeping of Louis Holt. Tom Murrell cleaned up the tail with 3 wickets, and then smashed a quick 20 not out in Preston’s victory charge. Opener Tom Mercer’s rapid 63 had set the tone, and Pierce (21*) aided Murrell in seeing Preston home in just 21 overs.

Preston 4ths visited Tewin on Saturday and after putting them into bat restricted their hosts to 179/6 in a rain-reduced 44 overs. There were two wickets apiece for Chris Newell, Sav Balac and Will Mercer. In reply, Peter Robbins scored a very well made 58, Rob Clark a super 37 and Nathan Russell a gritty 21 as Preston finished just short of the taget at 168/9 in a highly enjoyable match!