Saturday’s league matches were dominated by fantastic centuries from Jack Stevens in the 1st XI and Chris Cole in the 2nds:

Jack Stevens struck a record score of 140 for Preston 1st XI in the Saracens Herts League on Saturday as his side drew with local visitors Ickleford.

Preston skipper David Fleckney won the toss and elected to bat first, but the loss of opener Warren Hearne third ball of the game got the home innings off to a bad start. Number 3 Jack Stevens strode to the wicket and took command with a superb individual performance, one of the best the club has ever seen. Will Gallimore (44) helped steady the ship, and later Ben Hill (33) gave good support, as Stevens dispatched Ickleford’s bowling with impressive shots, great power and mature composure in a chanceless performance. Preston declared on 238 for 7 after 51 overs; Ickleford bowlers Marsden (3 for 50) and Timm (4 for 79) bowled with the most consistency for the visitors.

Preston’s pace attack got off to an unusually bad start with the normally reliable Mark Waters struggling to find his rhythm. At the other end, Australian Sam Crea bowled well and worked hard to get something from the wicket. Ickleford’s Jack Edwards (32) despatched poor balls to the boundary but was not able to capitalise and edged behind off Crea.

Ickleford were soon behind with the required run rate and looking for a plan they started to put the shutters down, with only Gornall (45), Timm (32) and the experienced Hilliard (32 not uut) making any type of score. Preston spinners Max Anderson (4 for 49) and Pete Murrell (2 for 11 off 11 overs) applyed the pressure and tried to tempt some attack from the lower order, but Ickleford held out. The game dwindled to a draw with Ickleford 189 for 8 after 48 overs.

Report and photos in the Hitchin Comet

Preston and Hitchin 2nd XIs shared a high-scoring draw at Lucas Lane in their second derby encounter of the season.

With only ten players turning up, Preston won the toss and decided to bat first on an understandably slow pitch and outfield after Friday’s rain. Openers Matt Burleigh and Chris Cole began cautiously against some tight Hitchin bowling, before Cole in particular began to find the boundary with some big hits. Burleigh was controversially dismissed for 26 after a partnership of 97, but skipper Ashley Catlin (45) was able to give Cole solid support in another big partnership. Coming on the back of a run of low scores, Cole was clearly delighted to reach an excellent century, before falling for 111 in the 43rd over. Then, after Catlin’s dismissal, Iain Williamson and Sam Penny both made brisk 21s as Preston finished on 227 for 3 after their 53 overs. 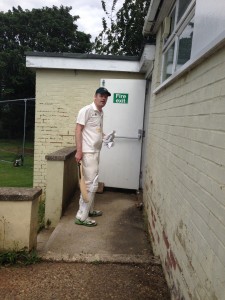 Chris Cole returns to the Hitchin pavilion after his 111

Preston could have put Hitchin under immediate pressure had a tight LBW decision gone their way and a looping catch to gulley been held, but Hitchin’s openers were able to settle and reached 80 before losing their first wicket. Tim Porter began to unveil some big hits to worry Preston, and had reached 72 before holing out to a grateful Iain Williamson at long on. Hitchin then began to lose wickets regularly as Andy Riant (4 for 42) and Nick Jones (2 for 61) applied the brakes. To their credit, Hitchin never gave up the chase and despite needing more than 8 an over in the final stages, Jonny Grey blasted a rapid 50 to keep the Preston fielders nervous. But catches were held, and Hitchin ultimately finished just short on 216 for 8 from 47 overs.

A disappointing batting display from Preston’s 3rd XI led to defeat against Southgate Compton seconds at Hitchin Boys’ School. Tom Murrell (4 for 45) led the way in the field as Preston restricted Compton to 169 for 9, although that was a decent score on a wet wicket. Only skipper John Garnham got going with the bat, making 45 as Preston fell short at 140 all out.

After a last minute notification that the game was to be played at Graveley’s hilltop ground, Preston 4ths were put into bat by Letchworth 5ths. They started off well, with a gritty 21 from Neil Pomeroy and a brisk 20 from Sam Singh, before skipper Dave Saunders hit 68 from 66 balls including 7 sixes. But a vintage collapse followed, and a total of only 145 all out was posted. In reply Terry Neale held up the Letchworth chase with only 10 runs taken from 11 overs, but as the wicket became drier batting was made to look very easy. The Preston bowlers also assisted with some loose deliveries, and in the end allowed Letchworth an assured 7 wicket victory.