Super Garnham does it again & a double win over Radlett

John Garnham’s 138 for the 3rds capped a terrific day for the club as the 1sts and 2nds did the double over Radlett, with the 2nd XI’s triumph keeping their hopes of survival alive into the final week of the league season.

Special correspondent Mark Waters, embedded with the 1st XI, sent us this report from Middlesex’s outground at Radlett:

Radlett inserted Preston on a decent enough wicket with perhaps something to offer the Radlett bowlers too. In the absence of regular opening bat Hearne way on honeymoon, Pete Murrell stepped in to open with Gallimore. It was a steady start against some accurate bowling but Murrell was soon trapped LBW by Radlett stalwart Brown for 6. Gallimore continued but was taken by a terrific caught and bowled off Cohen for 19. Jack Stevens at 3 again looked in good form but was caught for 20 and Crea was also making a start before he was stumped in a very tight decision.

Skipper Fleckney was run out having made a gritty start for 15 against again some fine spin from Radlett Skipper Foster and both Blair and Anderson chipped in with 17 each lower down. All these 20’s though set up for a great innings and return to form for No 6 Ben Hill who took some chances but hit some very positive strokes to get a much deserved 58. Just goes to show that against some tight bowling and a well drilled, young fielding side that if everyone can contribute 20 or soit can genuinely set the stage for a sound innings and let others take the reigns confidently to go on and make a score. Preston posted 215 for 7 off their 50 overs. Radlett’s Foster and Barratt getting two wickets and a typically miserly opening spell from Brown yielded only 1 wicket but only went for 17 off his 10.

Radlett’s young opening pair of Lipschitz and Cooke soon got amongst some very poor bowling from the usually reliable Waters and some erratic deliveries from Crea. Together with some very lacklustre fielding and a sense of just “going through the motions”, it did feel like Preston didn’t really want to be there at first. Morecroft also don’t fire with the ball and struggled with the leg side wides.

It really wasn’t until a rocket from Skipper Fleckney and the introduction of Peter Murrell and again Max Anderson did the tide start to change. Murrell, having been dismissed similarly, took a sharp diving caught and bowled to dismiss Lipschitz for 37 and Cooke was adjudged LBW for 55 soon after.

The Radlett middle order failed to keep the openers momentum though with some tight bowling at times from Preston but also some wayward shot’s from the Radlett players perhaps thinking this was a home run. Crea’s second blast was more effective with a mix of pace and cutters, the Radlett bats found him tough to read. With the fielders putting in the extra effort and some good catches Preston were starting to get on top. Muriel really bowled Preston back into the game and took figures of 10-4-4-20 and was really the pick of the Preston attack with Crea again supporting with 10-0-3-41.

The light faded very quickly and it was tough to see but Radlett Skipper Foster (arguably batting too low) started to smell a late turnaround and began to take it to the Preston bowlers. With Cohen also chipping away for 21 late on, the game was in the balance. Foster then swatted a high full toss down off Fleckney down Murrell’s throat at deep mid-wicket and Preston won this very tight game and mean that it was 30 well earned points, safety in Div 2 and to do the double against Radlett in both formats.

The final wicket however was a contentious one and perhaps if anything meant it was a disappointing end to a great game due to unclear understanding of the no ball rule for full tosses. The ball Fleckney bowled seemed high and was called as a no-ball from square leg, but the standing umpire at the bowlers end over-ruled and called it a legal delivery, fairly caught by Murrell. Contentious maybe but clarity needs to get better around these rules and there’s still some uncertainty it seems. That said, however, 7 of the 11 Radlett batsmen failed to make double figures so there are different angles to view the game from and Preston felt deserved victors and received congratulatory Tweets from Radlett. A good win against a side from one of Hertfordshire’s strongest clubs.

Preston 2nds kept alive their faint hopes of survival in SHCL Div 5A with an unexpected win at home over Radlett 3rds. Opting to bowl first, Preston could only admire some excellent batting from Radlett’s openers in a stand of 92 before skipper Ashley Catlin made the crucial breakthrough. Backed up by tight fielding, Preston’s slower bowlers then strangled the Radlett innings, with Louis Harrington-Smith’s legbreaks picking up 2 wickets and James Waters claiming 3 victims. A good late stand managed to take Radlett’s score to 187 for 9 from 50 overs, but on reaching 93 for 1 Preston felt the game was theirs as the top order of Matt Burleigh, James Waters (45) and Jack Morecroft (23) gave their side a fast start.

The somewhat controversial dismissals of Waters (did the ball hit the stumps before rebounding off the keeper’s gloves?) and Morecroft in quick succession then changed the momentum of the match as Radlett’s spinners denied the hosts any scoring opportunities. Five successive maidens signalled a difficult period for the home side, with former Preston star Anje Lague conceding just 20 runs in her 10 miserly overs. Ashley Catlin had to summon all his experience to grind out an innings as your correspondent bit his nails to the bone, particularly when potentially big-hitting Richard Gatehouse was disastrously run out. But with the help of Sam Waters and Casey Hughes, Catlin’s 45 not out got Preston home by 4 wickets with just 8 balls to spare.

John Garnham’s second big ton of the season was the highlight of the 3rd XI’s comprehensive victory at Botany Bay. After a cautious start against tight bowling, Garnham and opening partner Simon Luxton built an impressive stand of 168, before Lucky fell for 62. Andrew Hedges joined Garnham and made 43, but it was John’s day as he sailed past 100 to finish on 138 not out. The 3rd team skipper clearly follows the mantra of fellow Essex legend Graham Gooch in making sure his tons are all “Daddy Hundreds”!

Preston 4ths entertained Old Owens 3rds at Hitchin Boys School on Saturday, and were invited to bat first with the challenge of a sticky wicket and a tufty outfield. Alas a meagre 89 for 9 off 45 overs was the outcome with only Peter Robbins (18) and Chris Newll (19) giving the scorers much trouble. 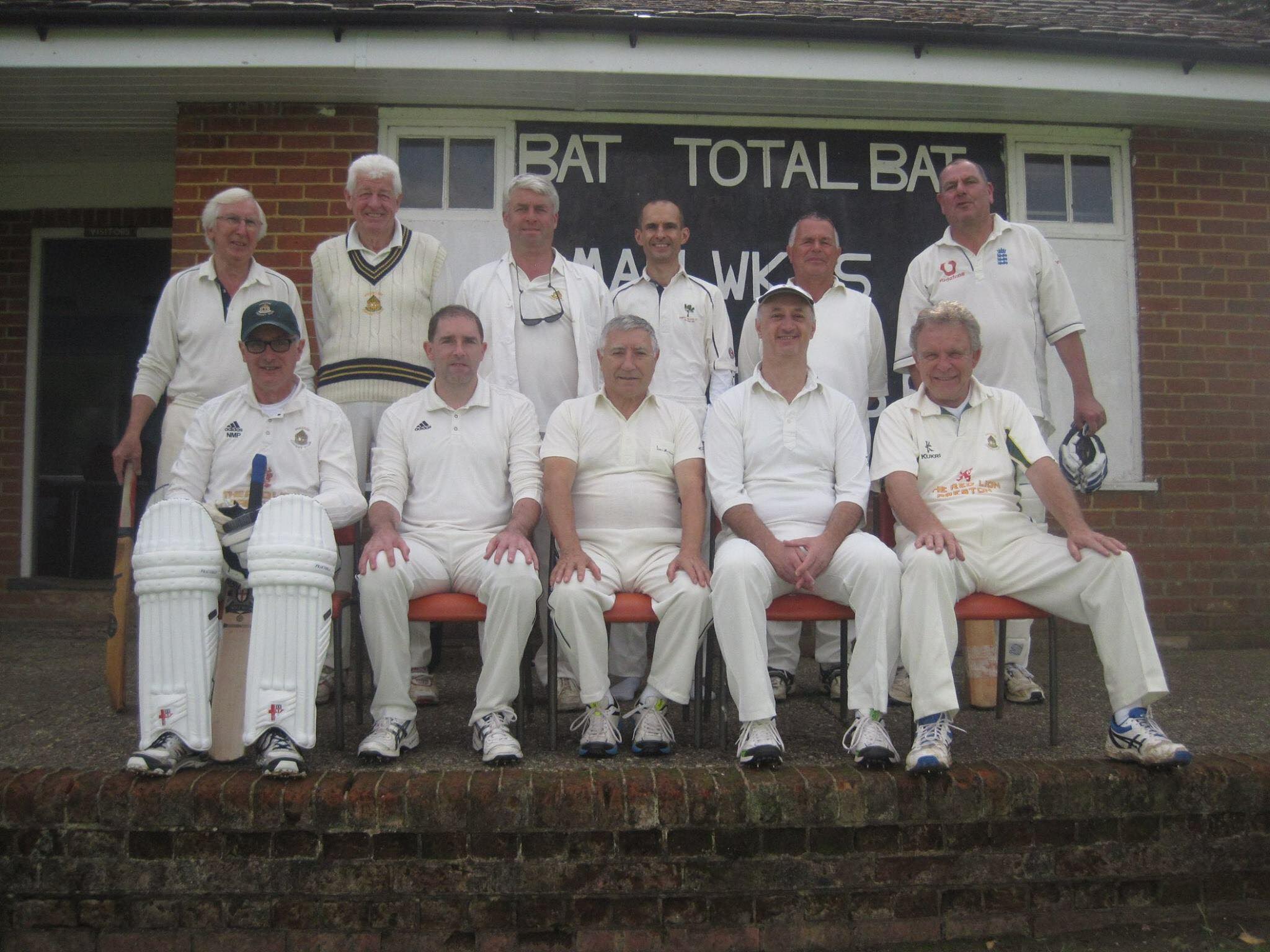 Combined age of over 600: 4ths prepare to take on Old Owens 3rds at HBS.

However, Owens found batting just as hard with Jason Williamson only conceding 4 runs from his 9 overs, and when Sav Balac came on to take 3 for 30 Preston fancied their chances. But a familiar face (Alan Hunter) steered Owens home by 5 wickets in the 38th over.

Preston hosted neighbours Lilley in a friendly on Sunday, fielding a mixed Development XI partnering some of our 1st, 2nd and 3rd XI players with our talented juniors. Mark Waters reports.

Once upon a time this would have been a regular fixture, but despite the close proximity of our villages to each other, Lilley and Preston have rarely played each other in recent decades, so it was great to be able to welcome them to Preston CC after many years’ absence. (First time playing them in 28 seasons – Ed.)

The weather was gloomy with rain in the air, but conditions held for the afternoon and an enjoyable game was had and played in the right spirit.

Preston fielded first and Skipper Pete Murrell pushed the young guns to take responsibility with the ball. Brothers Bradley and Taylor Moretti and young Chris Willis bowled with great skill against decent players with Willis picking up a wicket. Loose deliveries were punished so a lesson was also learned about control and trying to bowl to a field. If some catches were held Lilley may not have made as many as they did, but Preston stuck to their task and kept the right encouragement going.

A tremendous catch from young Taylor Moretti and a brilliant run out from Willis at fine leg, throwing to Taylor behind the stumps at the other end will go down as the major highlights in the field. All Taylor had to do was run up and take the bails off, but instead he launched an over-arm, Tessa Sanderson Javelin throw from point blank range that just clipped the stumps to run the batsman out. Phew!

Ollie Gallimore, bowling a mix of in-swing and pure filth, also picked up a wicket and Mark Waters picked up 3 at the end including that of Lilley’s opener Khan for 98. The Lilley innings closed after 40 overs on 207. This would be a good chase if we could manage it. 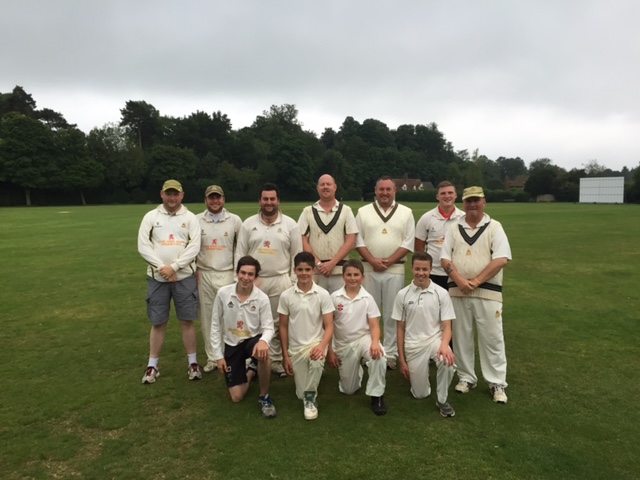 After a sumptuous Ali Morecroft Tea (thank you Ali), openers Matt Burleigh and Will Mercer took first dig for Preston. Burleigh sniffing his 1000 runs for the season chased after a wide one and holed out for a mere 3, but Mercer batted with really great composure and maturity for a decent 34. Will is developing into a fine batsman. Enter young George Constantinidi at No 3. Despite his physical stature, George is still very young and wants to whack at everything, but with great patience he constructed an excellent 50 – his second for the Club. Powerful hitting with some solid defensive shots too.

Will and George put together a partnership of 75 against some decent, straight bowling and both their enjoyment and that of their watching team-mates was great to see. Simon Luxton made 19, and then
Brad Moretti hung around and was unlucky not to penetrate the in-field with some big blows, but a calling mix-up saw George run out on 50. Another lesson around clear, loud calling was hopefully learnt. Muzza tried to bash his way back into the game and accelerate the run rate but was adjudged LBW for 23, with young Chris Willis nudging an encouraging 6. Ollie was cleaned up for a fat 0 to take him out of Man of The Match contention and with Waters and Smudger at the end needing 30 off the last 2 overs, the result was a foregone conclusion. Smudge tried to chase a wide, swift delivery and nicked off to be caught behind. Preston’s innings closed at 177.

An enjoyable game and hopefully one we can set up on a more permanent basis in the future. In the days when car ownership and travel was rarer, all our matches would have been at local sides like Lilley, so it is good to get an element of that back in our annual fixture list.

Huge positives during the day. Great bowling from the Lads and Taylor Moretti’s armpit catch at extra-cover from a hard hit will go down in Preston legend – sensational. George and Will’s batting also a sparkling reminder of some encouraging and emerging young talent within the Club ranks. Encouraging observations from the spectators too about the youth performances and thanks to everyone who played and supported.