Match reports for the final week of the league season, September 5th 2015

Andy Riant, Iain Williamson and Glenn Thompson led the 2nd XI’s heroic victory at Hatfield Crusaders to defy the odds and the drop, while the 1sts said goodbye to Sam Crea with a lucklustre performance against Northwood that was dominated once again by Jack Steven’s batting.

Preston CC entertained visitors Northwood on Sat in the final game of the 2015 Saracens league season. It certainly felt like the end of term as Preston failed to fire and gave title chasers Northwood the clear advantage to take back a well deserved win.

Preston had experienced heavy rain over the last few days and the wicket, despite being protected, was on the brink of being unplayable. With finer weather forecast and a small chance of any more rain, the game went ahead and Skipper Fleckney decided to bowl. The conditions certainly didn’t help the Preston seam bowlers who struggled with the conditions underfoot and with length but Waters picked up the wicket of opener Murphy for 23.

Northwood’s innings was however an impressive display as No 1 Skipper Rodgers and No 4 Panchal both accumulated individual centuries and finished each on 124. Preston’s lacked the fire-power with the ball and Fleckney was at times limited for choice. With James Stevens back from travels in one of his first games pulling a hamstring bowling, Northwood cashed in on some very loose deliveries. The Northwood innings totalled 314 for 6 off the 50 overs.

This was going to be too much, especially with James resting up in the pavilion. Despite some unnecessary verbals from the usually composed Northwood side, the Preston innings got off OK but was soon done up by straight bowling and tight fielding. With only two players making even double figures, the highlight was the class of Jack Stevens once again who took it to Northwood and stuck around to crash 83 and make it look relatively easy and showed the way for the rest of the Preston line-up. The highlight of the Northwood attack was again Panchal who took home 8-3-4-28. Preston has some serious talent but this year but some really struggled to come to the party a little this year and we hope that next year brings more hunger from several members of the senior sides to fulfil what Preston could achieve.

And that was that. A bit of a damp squib of a game with some composed and at times punishing batting from Northwood’s top order, and another class knock from Preston Stevens in tricky and far from ideal conditions. Well played Northwood and well deserved promotion.

Preston also said goodbye to Aussie Sam Crea who has been a breath of fresh air throughout the whole season. Sam has been such an amazing player this year who has shown class at time this year with his left arm over pace and fiery but controlled aggression. We all have our highlights of the season but the demolition of several teams in quick time really stand out.

Used a hired gun by Surrey to bowl at theirs and England’s line-up for most of the summer, the whole UK experience has been excellent for Sam. The Club wickets didn’t play to his strength so much but he’s been highly influential around the Club as a whole and has kicked Preston CC in the pants if we haven’t been playing to his tempo. We’ve made a mate for life and we hope to welcome Sam back one day soon and we wish him well for his onward cricket journey and life down in Melbourne.

It’s also encouraging to see North Herts Cricket in general still doing well. The Saracens League is the biggest cricket league in the country and to ensure cricket is enjoyed by everyone involved is no easy task. There have been some big highlights for other Clubs too around the Hitchin area and congratulations to all this year. Worth the effort.

A simple equation at the start of the day: the Twos needed to win to stay up AND hope that other results went their way. Their opponents, second-placed Hatfield Crusaders, could secure promotion with a victory. 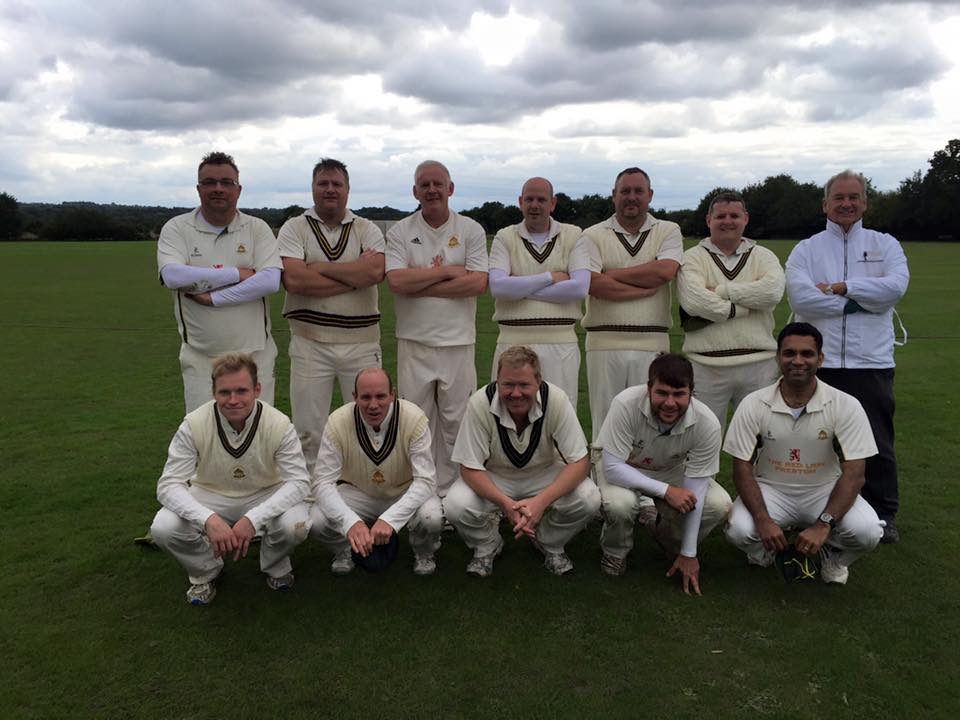 The Twos were greeted in Hatfield by a very wet, green pitch, long grass in the outfield and a dirty, dark changing room devoid of any working lights. Skipper Ashley Catlin won the toss and had no hesitation in bowling, although this might have suited the home side as some of their players seemed happy to arrive after the game had started.

Ollie Gallimore and Nick Jones opened the bowling, but with the lacquer refusing to come off Ollie struggled to control the slippery ball, and he was swiftly replaced by Iain Williamson. With the pitch bringing back memories of the Baldock days of his pomp, Skinny was quickly into his miserly stride and the runs dried up. A catch to Catlin at cover, and then a gentle skier safely held by Srini Nanjundan in his first appearance of the season, and Preston were on top.

Preston’s tactic of taking all the pace off the ball and a Phil Gurney patented ring field frustrated the Crusaders batsmen, who generally like to give the ball a good whack. Andy Riant replaced Nick Jones and proceeded to bowl superbly, recording season best figures of 9 overs, 5 maidens, 5 for 6. Wickets fell regularly, and even the stonewall Hatfield veteran Kevin Whitehead got frustrated and holed out to Louis Harrington-Smith at mid-on.

The Twos fielding was superb, and the captain couldn’t ask for more as the players rose to the occasion to back up their bowlers. One of the Hatfield batsmen clearly disagreed with his LBW decision, although he missed a full toss, and Catlin gathered his troops to warn them to keep their heads and their concentration. There was to be no letting the tail slog vital runs.

Ollie Gallimore dived forward at cover to take a fantastic catch just above the grass off Catlin, who then finished the innings with a nonchalant one handed caught and bowled. Promotion chasing Hatfield were all out for 88 in the 39th over.

With tea not ready, Preston’s openers Matt Burleigh and Iain Williamson went straight out, but Hatfield’s first LBW shout was successful and Burleigh was gone for 0. Jack Morecroft was soon bowled by a jaffa that nipped back extravagantly, but Nick Jones, sent up the order, looked up for it and Preston went to tea at 15 for 2.

Jones crashed a couple of boundaries at the resumption but was then castled by Hatfield’s excellent seamer Kumar, who was a real handful on this surface. Fortunately, Skinny dug deep and played his best innings of the summer, seeing off Kumar with the help of Richard Gatehouse and a vacant slip corden that allowed several edged fours. Gatehouse decided attack was his best option and hit a huge 6 over mid-on before holing out trying it again, but he’d added 16 vital runs and Preston were halfway home with 6 wickets still in hand.

Skinny’s long vigil came to an end as one scuttled along the floor and bowled him, and Catlin was joined by the always optimistic Glenn Thompson, who immediately slapped a low full toss miles over mid-wicket for 6. Suddenly the fielders heads dropped. Catlin struggled to score and was caught behind off another jaffa, but Thommo was leading the Preston challenge and joined by the determined Andy Riant.

A short ball chipped over the infield and then a glorious cover drive, and suddenly Thommo had the game won. With London Colney and Flamstead both losing, the Twos had completed their Great Escape from relegation, improbably winning their last two games against sides placed in the top three. In the process they denied Crusaders promotion, and the celebrations back at the Red Lion lasted long into the night.

A comparison of the final table with the rest of the Herts League will show just how close all the Div 5A sides are to each other, and it is sad to lose two friendly clubs, good pitches and teas at London Colney and Flamstead. Watford 2nds were the best team and deserved their title, but Preston 2nds 8th place is their highest ever finish in the league, quite an achievement considering we appeared all but relegated just two weeks ago.

With their intended opponents conceding on Thursday, the 3rds finished 5th in Div 10B and can look optimistically towards bettering that next season.

Preston 4ths took a stronger team than then have recently fielded to divisional champions Datchworth on Saturday, but still finished second best. Inserting the home team, Preston were satisfied at drinks with the frugal bowling of Jason Williamson, Sam Singh and Chris Newell. Then, as has become usual, the second half went pear shaped as Datchworth posted 235 for 6. Preston’s reply was rather pathetic, with only 76 mustered, The top scorer was Mark Smith (jnr) with 28. But at least Big Bird’s Barmy Army finshed 7th in the division.