A wet Saturday 29th July 2017 saw the senior three sides forced to abandon their matches, but the 4ths became the first side to beat Old Haberdashers 4ths in Regional Div B East, thanks to the run rate rule operating in that division.

After a week of selection shortages for the Club, the strength of the colts section allied with Dave Saunders’ contact list ensured that the 4th team fielded a comparatively strong team against unbeaten league leaders Old Haberdashers IIs.

With rain threatening later in the day, Old Habs won the toss and were clearly expecting to roll Preston quickly and win the game before tea. However, openers Biggs (34) and Zahir (20) got away to a good start against the hostile pace of South African overseas Fabrey who eventually claimed Zahir with one that seamed away and took off stump. Macca quickly fell for the gentle wobble of Haria, holing out at mid off, before Hull (22) upped the pace to the 20 over drinks break, with Preston at a creditable 91-2. The departure of Hull (bowled) and Biggs (caught behind) left Preston at a precarious 102-4. However, David Clark (48*) and Chris Newell (20), maintained the momentum as Preston advanced beyond 150, Clark in particular punishing the bad ball with 8 fours and a six in his 48*. The fiery Fabrey returned and tried bouncing Chris Newell out, at which point Chris took one pace down the pitch and launched him over mid off for six. Fabrey was a little quieter after that. Newell and Moretti perished in search of late runs and Kelvin Stark (5*) ended the innings with Clark at a very respectable 167-6 from 40 overs.

In reply, the Old Habs openers were made to work hard for their runs by the accurate bowling of Macca (8-1-16-1) and Hull (8-1-28-1) supported by enthusiastic and committed fielding. After Rupasignha (6) had fallen LBW to Hull, the powerful hitting of Jacobs (20) threatened to take the game away from Preston until he slashed one to Rupert Bruce at point, who claimed the catch with the ball wedged in his left armpit! Old Habs continued to find it difficult to score quick runs and with the increasingly heavy rain settling in, the players left the field at 81-2 off 21 overs.

A quick review of the league rules showed that Preston’s net run rate of 4.18 beat the 3.86 of Old Habs, proving once again that every run counts.

Massive thanks to the occasional players who helped out this week and the ground crew for the improving Whitwell wicket. An excellent, if slightly fortuitous win for the 4ths.

Under 13s Jack Munson and Luke Ponder played their first league matches for the 3rd XI on Saturday, together with a second appearance of the season for Adam Turner. All three Juniors contributed enthusiastically as the Thirds escaped undefeated from Redbourn 3rds once the rain set in, but not before they’d had to work exceptionally hard with the bat.

Table topping Redbourn won the toss and stuck Preston in, no doubt hoping for a quick victory and 30 points before the forecast downpours arrived. Matt Burleigh and Martin Pierce  gave Preston a steady start against some good bowling, before Bomber was dropped behind off a nut, and then bowled by a yorker while doing his best Dawid Malan impression. The dry pitch crumbled on top and gave plenty of assistance to all of Redbourn’s bowlers, who also gave few bad balls to hit.  Preston’s older players (Pierce, Greig Hearne, Hedgy and Garnham) all made double figures, but none could go on to a big score as wickets fell steadily.

Fortunately, Jack Munson dug in determinedly and played a long, vital innings, holding his end up while the senior players did their bit at the other end. Jack may have finished with only 8, but he allowed Paul Constantinidi in particular to boost Preston’s score with a decent 27. More importantly, Jack helped Preston use up all but one of their 53 overs, as the last wicket fell for 113, and this proved decisive in securing 10 points for Preston.

After tea Redbourn inevitably tried to smash their way to the target as the sky became darker. But time was quickly running out. David Ogden bowled a brilliant over, beating the bat 3 times in succession before finding a thick edge which Gambo snaffled at gulley. And then the rain came, with Redbourn 36 for 1 after 7 overs. 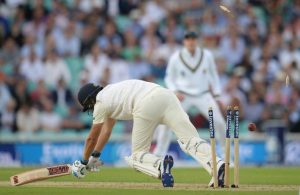 Not Bomber being yorked at Redbourn 3rds on Saturday