Preston were asked to bat first on a wicket that had seen plenty of rain overnight, although it still looked good. Australian Justin Powick and Warren Hearne played well to see off the new ball and accumulate a partnership of 68 before Hearne fell shortly after the introduction of spin. Anthony Ender and Paul Barker also fell in quick succession for ducks to leave Preston in a vulnerable position of 85 for 3.

Will Gallimore (37) then joined Powick to post a 4th wicket partnership of 120 and take Preston past the 200 mark. Powick finally fell for a massive 147 in a knock that dominated the Preston innings and was really the difference between the two teams. Powick’s score puts him among the highest innings in the Club’s history, although still some way short of Stephan Myburgh’s legendary 200 at Holtwhites Trinibis.

Preston declared on 219 for 9 losing a cluster of late wickets in pursuit of some quick runs.

Abbots Langley looked aggressive early on but both openers fell to a wicket apiece from new ball bowlers Ender and Seb Walton-Adams. On a responsive wicket to spin, Max Anderson and Pete Murrell then bowled in tandem, taking wickets at regular intervals. After Anderson had bowled the dangerous looking Hamilton for 19, hopes of a win for the home side had all but gone.

But Abbots Langley skipper Warner (28 not out), roughed it out for the best part of two hours, supported by his lower order to prevent Preston taking maximum points and the win. Anderson 4 for 47 and Murrell 3 for 17 off his 15 overs bowled well, supported by a faultless fielding display to leave Abobots Langley clinging to the draw at 113 for 9 off 50 overs.

Both sides played the game in a great spirit and look forward to their rematch later on in the season.

A determined opening partnership of 153 by Barry Turner (79) and Tom Lincoln (69) at the Recreation Ground saw Preston 2s to Div 5A victory over table-topping Parkfield & Headstone on Saturday.

Parkfield chose to bat first on a damp wicket with slow outfield and opening bowlers Mark Waters and Ollie Gallimore were able to restrict their opponents scoring to around 2 an over for the first 20. However some patient batting in a second wicket stand of 84 seemed to have set the visitors up for a competitive total, reaching the last 20 overs with 96 on the board and 9 wickets in hand. Some perhaps over-confident batting against Preston’s slower bowling led to a middle order slump with 6 Parkfield wickets going down for 45 before the tail wagged enough to take the league leaders to 182-9 at the end of their allotted overs. Preston were again only able to hang on to one of the catching opportunities that came their way but two more stumpings for Liam Kenna and a run out combination with Turner helped to peg back the Parkfield total.

Given Preston’s recent batting frailty the hosts took tea not particularly confident of overturning Parkfield’s 100% record. Turner and Lincoln’s well -judged partnership confounded the bookmakers though, gradually accelerating from a solid start by combining good running between the wickets with some well-timed straight drives and punishment of the shorter ball. Scoring opportunities increased as Parkfield shuffled their bowlers and having got to 150 in the 34th over, Preston’s openers were only separated by a run out attempting a second run, with Turner heading to the pavilion for a classy 10 boundary 79. Although Lincoln followed soon afterwards for a previously chanceless 69, Callum Blair and James Skirrow were able to push Preston over the line and up to 7th place in the league with 8 wickets and 12 overs to spare. 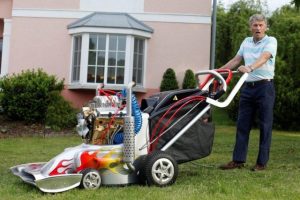 Andy Riant off to mow the meadow

A big thanks must go to Andy “Lawnmower Man” Riant who, in light of the fact the outfield wasn’t cut for much of the week because of the weather, started to mow the outfield with a push mower at 9am and didn’t finish until about 12.30. An amazing commitment to make sure the Ground looked the best it could. We earned that victory in more ways than one.

We’ve decided to have the attached commissioned by Clark & Sons, in acknowledgement of Andy “Lawnmower Man” Riant. We’re reliable told by Clarky’s lawyers that this bad boy will cut the grass in half the time although with 14 times the carbon emissions.

The Thirds were made to work hard for their win on a very damp track at Botany Bay. Indeed, after the heavy overnight rain the match was in doubt, and we thank our hosts for “getting the game on”.

With John Garnham away on holiday, Richard Gatehouse took the reigns and opted to bowl first when he won the toss. Bhav Patel and Iain Purton bowled steadily but Botany Bay’s openers gave their side a good start. The total had reached 48 when George Constantinidi got one to rip past both the bat and keeper Will Mercer. The non-striker called for a run but Matt Burleigh managed to stop the ball from slip, and George calmly gathered the throw to complete the run out. Wickets then fell fairly regularly. Bhav Patel finished his 15 overs with 3 for 26, including an excellent catch by a diving Club Chairman Paul Constantinidi that had scientists in Hawaii puzzling over their seismometer. An out of sorts Iain Williamson also picked up 4 for 20 despite the 4 hours of sleep and 54 holes of golf he’d enjoyed over the preceding days. But partly thanks to 5 dropped catches, Preston didn’t take the last Botany wicket until the final over, and faced a tricky total of 107 to chase.

Simon Luxton and Matt Burleigh negotiated a probing opening burst from Botany Bay’s youngsters, before Lucky top edged a simple catch to the keeper with the score on 28. Their stand included not just one, but two all-run threes – a real collector’s item. Richard Gatehouse then took the attack to the first change bowlers, launching a lovely straight six into the sightscreen, and another couple over cow corner. Helped by a couple of dropped catches, Richard’s 39 seemed to have broken the back of the innings. But Botany’s young seamers returned to extract life from the pitch, and scoring once again became difficult. Bomber (31*) and Gambo decided to do a Rhodes and Hirst and get them in singles, before Greig Hearne arrived to smash the winning boundary through the covers, spread his arms wide, and ask what all the fuss was about.

A good win by 7 wickets in 31 overs, and an enjoyable game against friendly hosts, with a special mention to Botany’s young bowlers who made excellent use of the conditions.

A mixed Sunday 1sts that included 4 players from Saturday’s 3rd XI, but missing the prolific Justin Powick, almost pulled off a win against Div 2 leaders Ickwell at the Field of Dreams.

After a slow start against tight Ickwell bowling, Preston found themselves 34 for 4. Skipper Pete Murrell (38) arrived to turn the innings around, first in partnership with Liam Kenna (15), and then in a good stand of 59 with in-form Louis Harrington-Smith (24). George Constantinidi also played some lovely shots in the final overs to take the total to 153 for 7 from 45 overs.

Ickwell’s Ross Fenton gave their innings a barn-storming start, smashing Ollie Gallimore out of the attack. But 3rd XI seamer Iain Purton was unfazed, and bowled an excellent spell to pick up 1 for 23 from 7 overs. Max Anderson squeezed one under Fenton’s bat after he’d completed a fifty from just 42 balls, and wickets began to fall regularly. Pete Murrell picked up 3 for 17 from 9 terrific overs, but for Ickwell Harry Fallows rode his luck and smashed every short ball he received to the leg side boundary. Fallows’ 49* dragged Ickwell past the target in the 38th over, despite the good effort from Preston’s bowlers to take 8 wickets.