Justin Powick and his father Adam set a new record batting partnership of 307 for Preston on Sunday in the Beds league against Ickwell. Justin’s 196 was also the second highest score ever for Preston. Details and photos below, but first reports from the Herts league as all our XIs continue to progress up their respective tables.

Preston skipper David Fleckney won the toss and asked Watford to make first use of what was a good wicket. After a first over that cost 16, Casey Hughes then obliterated the top order leaving Watford at 26 for 3. The visitors then had by far their biggest partnership of the innings amassing 53 with the impressive Ravi Panchal top scoring with 32. It took a great diving catch from keeper Ben Hill off the bowling of James Stevens (3 – 33) to dismiss him and leave the Watford innings teetering at 80 for 5. After a long miserly spell from the experience of Mark Waters, Anderson (1 – 11) and Murrell (3 – 8) bowled in tandem to run through the lower order and bowl Watford out for a well under par score of 130.

Preston made short work chasing, with a brisk opening partnership of 73 between Justin Powick (65 not out) and James Stevens (32). Brother Jack Stevens hit two monster sixes on his way to 27 before holing out a few runs short of victory. Preston completed the victory by 8 wickets in the 28th over.

Preston 2s continued their surge up the Herts League Division 5A table with a four wicket victory at West Herts 2s. A third consecutive victory leaves Preston in 4th place with six games to go to try and catch the two promotion places. The best way to achieve this is to beat the teams in those positions and this Preston did in some style on Saturday, completing a seasonal double over their rivals from Watford.

Asked to bowl first on a dry, used wicket Preston made early inroads with Ollie Gallimore (2-20) inducing two ducks in his first four overs and then Henry Morecroft taking two more. Once Casey Walker had trapped determined opener Paxton lbw for 33, West Herts had subsided to 56-5 in the 25th over and a low total seemed likely. Veteran Duncan Hodges (74 not out) played an excellent innings however, coaxing the middle order toward respectability with well-judged shots and good running. Preston tried 7 bowlers in an attempt to force wickets, but their hosts were able to post 186-8 from the maximum 53 overs, Morecroft finishing with 4-32.

In reply, opener Tom Lincoln looked in imperious form, guaranteeing that Preston were always ahead of the required rate with a burst of well-timed shots, particularly on the off side. His 37 from 32 was followed up by a 96 partnership between Jack Morecroft (64) and Callum Blair (50) who both played with increasing confidence and a pleasing range of shots, finding the fence from time to time but crucially keeping the scoreboard ticking with good placement and running – no maiden was bowled in the first 32 overs. So Preston reached 168 of the required 187 with only two wickets down, and the well-set Morecroft accompanied at the crease by the reassuring experience of skipper Ashley Catlin. Cue a major middle-order wobble as 4 wickets fell for just three runs and all of a sudden the hurried crunch of Velcro and cursed misplaced helmet punctuated the previous serenity of Preston’s progress. It was left to Henry Morecroft (13 not out) to push Preston over the line with 8 balls to spare but not before a couple of big appeals and a reminder that there is still room for improvement.

Broxbourne’s withdrawal from Div 10B meant all their results were expunged from the records. As such, Preston climbed to second in the table and despite a weekend off, they remained there as third placed Southgate Compton 2nds lost to Bentley Heath’s Twos. The threes are now well positioned to go for promotion, resuming their campaign this coming weekend against Flamstead 2nds.

Preston 4ths travelled to Tewin 2nds on Saturday and chose to bat first on a glorious afternoon. A pleasing 250/6 was set thanks to 42 from Attiqur, 37 from Matt Burleigh, Will Mercer and Iain Purton, and 36 from Chris Newell. Despite having 42 overs to bowl at Tewin, stubborn batting gave the home team a draw at 152/7. But 17 points gained by Preston lift us 4th in the table. 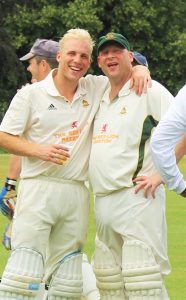 Preston’s Australian batsman Justin Powick and his father Adam set a new club record partnership for any wicket with 307 against Beds County League Div 2 leaders Ickwell on Sunday, beating Bob Eagles and AJ Cook’s 255 for the Sunday 1st XI against Biggleswade in 1990. The Powicks opened the batting at their opponents’ picturesque ground, with Justin smashing his way to 196 – his sixth century of the season and itself the second highest score ever made for the club, after Stephan Myburgh’s legendary 200 against Holtwhites Trinibis in the County Cup in 2004. Dad Adam contributed 103 as Preston ran up 339 for 3 in their 45 overs. 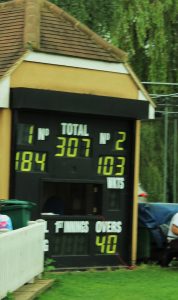 Ickwell never looked likely to challenge the target and fell away to 170 all out, with Max Anderson taking 3 for 6 and Louis Harrington-Smith 3 for 29.

Preston hosted near neighbours Whitwell on Sunday to continue one of our oldest fixtures. Batting first, Whitwell posted 163 for 7 from 40 overs, with legspinners Ollie Catlin and Charlie Bruce taking 1 for 37 and 2 for 26 respectively.

After a magnificent Chinese tea from Angel, Preston’s reply got off to a poor start at 17 for 3. But Chairman Paul Constantinidi (50) and Ashley Catlin (73*) put on 110 for the 4th wicket to rescue the innings and take Preston to a winning position. They crossed the finishing line in the 37th over for the loss of 5 wickets.