Highlights from cricket week and the penultimate week of the 2017 season, 26/27 August.

Preston were looking to get back to winning and morale boosting ways against Holtwhites Trinibis on Saturday, after some recent disappointing games.
James Stevens and Warren Hearne opened up for Preston and put on a solid partnership of 75 before both being caught and bowled around the drinks break.
Jack Stevens and Ben Hill then started to play some excellent strokes and take it to the HT attack. Jack made an excellent 56 before being bowled, and Hill (35*) continued with Blake Mills, who crashed some powerful strokes for a fast 20*. The Preston innings closed at 200-4 off 50 overs.

The HT innings started well with opener Younis hitting the third ball for a 6 and making clear his intentions. He made an aggressive 29 before succumbing to a good ball from Mark Waters. The HT middle order then began to steer the HT side toward victory, capitalising on looser deliveries with some unorthodox but powerful shots. When James Stevens trapped Ali LBW for 61 and Jack Stevens bowled the aggressive Masood for 30, a beam of hope presented itself, but HT brought up the winnings runs in the 42 over.

In the Beds League Div 1 on Sunday Will Mercer made his maiden league half century to help Preston beat Ickleford. Will’s 63* guided Preston to 190 for 8 in their 45 overs, after opener Pete Murrell had also made a 50. In reply, Ickleford got within 10 runs of Preston’s total before losing their last wicket in the 31st over at 180. Pete Murrell followed up his 52 by taking 5 for 46, a fine double performance.

Preston 2s suffered their third consecutive league defeat with a 110 run drubbing at Hatfield. Asked to bowl first Casey Walker was unlucky not to break an opening partnership that went on to yield 96 before Preston’s spinners were able to slow the scoring. Wickets in hand meant that all of the home middle order were able to attack and with dropped catches helping the total along, Hatfield posted 222-9. David Fleckney took 5-52.

In reply Alf Rehman showed admirable determination to build a responsible 55 but could find no support as various batsmen found diverse methods of dismissal in front of an increasingly raucous home crowd. Only Greg Hearne (15) with some heavy blows could manage double figures as Preston subsided for 112. The 10 league points gained were enough to purge any lingering fears of relegation so 2018 will see Div 5A cricket again for Preston 2s.

An under-strength 3rd XI gave one of their better ground-fielding performances of the season to restrict promotion-chasing Sandridge 2nd XI to 219-5, although there were several dropped catches. With injuries restricting both Iain Williamson and Ian Hamilton’s ability to bowl, Nigel Biggs and John Garnham were forced to step up and each managed to bowl 10 good overs to bail out the team.

In reply, Martin Pierce made a good start before Matt Burleigh gloved an unplayble delivery that spat from a full length and looped over his head to the keeper. Then, when Pierce fell and Iain Williamson was adjudged LBW, Preston’s hopes looked slim. Captain Garnham dug in, but Sandridge’s skipper recognised the home side’s last chance and placed 8 men on the boundary to restrict his scoring. Garnham still made his first league 50 of the season but Preston finished well short on 172 for 8.

The Thirds have now dropped to 5th but are already guaranteed to remain in Div 9B next season.

Blake Mills 101 (retired) was the highlight as Preston overcame Jackdaws/Letchworth’s 215 all out in 31 overs on Wednesday, for the loss of 7 wickets.

On Thursday, Preston were soundly beaten by a strong Malcontents side. Batting first, the visitors made 266. Preston’s reply began brightly with a stand of 86 between Will Gallimore (49), batting left handed for a change just because he can, and Pete Murrell (35). Thereafter the innings subsided with regular wickets falling, including your correspondent suffering one of the stranger umpiring decisions of his far too long career. Preston were all out for 170 in time for a good session in the Lion.

On Friday the President’s XI, an invitation side from ex-Preston CC Players, Friends of the Club, and other current players from local cricket clubs, posted 250 off 40 overs, after an amazing lunch. Preston responded with just 155 all out, Alf Rehman making 52 and Liam Kenna 47. But a superb day, with August sunshine for a change this damp summer, saw lots of Vice Presidents and Supporters attending and catching up with old friends. 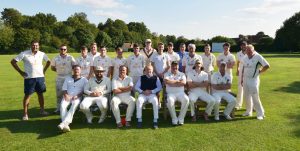