Preston maintained their winning start to the season with another hard fought victory this time by 11 runs over their hosts Abbots Langley in Herts Division 2A.

Preston skipper Max Anderson had no hesitation on batting first on what looked a good surface after winning the toss, and they reached the 20 over mark at 61 for 2. Preston batters all found life quite difficult on a surface that was 2 paced and very dry as Abbots soon figured out pace off was the best option in restricting them. All of Preston’s batters got in but failed to go on and make a significant score with James Stevens (30), George Biggs (28), Lewis Balcombe (25), Jack Stevens (22) Dan Plumb (20*) and Ben Hill (18) all contributing to take them to 187 for 8 from their allocated 50 overs, a score some 20 runs short of a par total was the general feeling.

Abbots got off to a comfortable start reaching the drinks break at 54 without loss by the 17th over, as Preston struggled to find the breakthrough. However the first ball back after the drinks break saw some exceptional fielding from Lewis Balcombe resulting in the run out of opener Warner for 24, and 6 overs later Ben Hill stumped the dangerous Aussie David Cleary (31) of Max Anderson’s bowling. Yet again Preston were indebted to the bowling of spin duo Max Anderson (9.2/3/31/4) and Pete Murrell (10/3/23/3) as they combined to restrict their hosts and to continually increase their run rate resulting in Preston picking up wickets at regular intervals. The game went down to the final over with 11 required for victory and it was skipper Anderson that bowled number 11 Watson to secure Preston another trilling victory.

Preston entertained a much changed Waltham Cross Rosedale team at the field of dreams. On losing the toss Preston found themselves in the field. The new look bowling line up of Gallimore and Hughes opened up but there was a lack of movement in the pitch to trouble the openers. A breakthrough came when Gallimore (1-54) tempted the opener to drive on the up to George at point. The opposition skipper came to the crease and the partnership started to develop with both playing strongly down the ground. As drinks approached the pair reached their 50s before Catlin (2-47) got the breakthrough with a rather lucky delivery that was caught by Casey. Andy Riant (0-42) was keeping the runs down at his end but with the WXR batsman looking to get on with it mistakes were coming in the field and with Catlin chopping and changing the bowling to get a breakthrough runs were coming at a healthy rate. Louis (1-17) got a wicket then Callum (2-32) helped himself to a couple of wickets. But the WXR number 6 was on a slog fest, using his newly purchased Slazenger bat to smash it to all parts, and the innings closed on a massive 283/6.

Preston knew a quick start was required, and openers Mercer and Lincoln went off like a rocket as the ball sped across the electric outfield. 70 came up in 10 overs before both fell LBW in quick succession. Ashraf and Callum settled in and took the score over 100 before Callum departed in the 21st over. At drinks Preston were 131/3 with Ashraf striking the ball well. The introduction of a couple of new bowlers was to Catlin’s liking as he peppered the cover boundary and a unlikely victory looked on. Then a communication mix up saw Ashraf run out for a good 45. Unfortunately a couple of more quick wickets saw us slump to 198/7 with 13 overs remaining

The target was now to push the ball around and try and keep wickets in hand for last 5 overs. Tennant and Catlin were struggling to find the boundary as 5 sweepers were out and relied on the extras and singles to keep the score going. With 5 overs left 48 were needed. Unfortunately, some big swings were unable to find the boundary and when Catlin went for 64 in the 49th over there was still 25 needed. Craig smashed the last over for 16 to leave us tantalising short on 272/8. A great game of cricket played in the correct spirit.

The Thirds continued their great start to the season with another crushing victory, this time away at London Colney 2nds. The hosts’ ground had been badly affected by April’s wet weather and this was the first match to be held there this season. Not unexpectedly, the usually excellent wicket and outfield were slow and this played a big factor in the match.

The hot sunny weather pursuaded skipper Iain Williamson to bat first, and Matt Burleigh and newbie Mark “Not Smudger” Smith got the innings off to a good start. Colney’s slow bowlers kept the run rate in check (they didnt really have many bowlers who were not “slow”), before Burleigh shut his eyes and launched a few over the top. This did the trick and the now spread out field allowed Preston to up the run rate. A partnership of 122 ended in the 35th over when Burleigh (55) pulled a short ball straight to midwicket. Smith went on to make 69, and Oli Catlin then also got his eye in to make a good 27*. With some busy cricket from the middle order batting Preston finished on 209 for 6.

Iain Purton and Bhav Patel were soon among the wickets, Luke Ponder kept his cool to affect a run out, and Colney’s innings never really got going. The middle order found run scoring tough and allowed Preston’s youngsters Luke Ponder (1 for 14), Oli Catlin (1 for 22) and Alex Williamson (1 for 8) to have decent bowling spells. The captain then took his usual four-fer with a mixture of good and not quite so good bowling. Numbers 10 and 11 smacked Swampy around for a couple of overs but Skinny cleaned up and Preston were winners by 66 runs.

Three matches gone and the Thirds are joint top of Div 9B with Sandridge 2nds and Hemel 4ths.

There were plenty of runs scored at Whitwell on Saturday, most of them by John Taylor of Tewin who carried his bat, scoring 137* out of Tewin’s total of 216-5 against Preston 4ths. The other six batsmen mustered 73 runs between them as the Preston fielders and bowlers were able to subdue them but could do nothing about the hard hitting Taylor who gave one chance in his early 20’s before cutting loose. Wickets were shared between Hickman 1-31, Newell 2-48 and Jarry 2-52 with young Joe Clark returning a respectable 8-0-35-0.

After losing the openers Biggs and Pomeroy cheaply, Saunders (28) and Robbins (33) re-built the innnings, assisted by a good knock from Joe Clark (19) and hard hitting newcomer Mark Carter (11). However, wickets continued to fall regularly and with Preston at 147-9 an early finish was on the cards until Jarry (20) and Hickman (15) secured valuable batting points in pushing the score along to 187 when the final wicket fell in the last over of the game.

On Sunday Preston made the longest trip of the league season away to Great Brickhill. Pete Murrell won the toss and decided to bat on a good pitch with short boundaries.

Preston started off with a string of early boundaries and hard hitting. Murrell was adjudged to be LBW for 32, which brought Will Mercer to the crease. Alf fell soon after, but Mercer didn’t stop bringing his fifty up in 45 balls. He then decided to take the scoring rate up and hit consecutive 6s over mid wicket off the spinner. Wickets fell regularly until Ben Hill 48* steadied the innings and guided Mercer to his maiden hundred off 80 balls. Soon after Will was out for 109 which included 13 fours and 3 sixes. Preston finished on 252 for 8.

The Hosts chase never dipped below the required run rate and wickets proved hard to come by as Great Brickhill won by 7 wickets with a centurion of their own, Jilesh Pattni with 102 off 120 balls. The only bowlers to take wickets were David Fleckney (9-0-37-1) and George Constantinidi (4-0-25-2) as well as a run out from Max Anderson.

Preston move on to the Village Cup Semi final away at Northchurch next Sunday.

The Preston Sunday 2’s had their first outing of the season with a thrilling match against Rebourn CC.

With Clarkie taking us the cross-country route via the various pubs he’d been systematically thrown out of over the years we finally made it to the beautiful ground of Rebourn CC. It looked just as we remembered and a perfect picture of Sunday cricket.

With only 10 men and only young Luke Ponder being able to limbo under the bar of the youth development, we weren’t entirely sure what to expect. In the absence of Dave Fleckney, Skipper Waters finally got his chance to shine. Toss won and unanimously all voted to have a knock as it was too hot to do anything else in our first timed game since the late 90’s.

Biggs and Bomber opened proceedings really because it rolled nicely off the tongue. Unfortunately Bomber was back in the hutch having been cleaned up by what looked like a good nut. Enter Clarkie who bludgeoned his way to 52 in quick time beautifully supported by Nige who made a solid 30. Both played some glorious strokes against some accurate a tight bowling.

Preston MOTM was Swampy who came in No 4 who batted superbly for a well crafted 81*. It was a lightening quick outfield, short boundary on the road-side and some very sensible quick singles were taken. Loose bowling was given short thrift.

Luke at No 5 opened his account with a beautiful 6 and stuck around for several overs; impressing the selectors. Waters bullied a 30 and Gambo worked around for a few overs.

Skipper Waters not having much idea about declarations pulled Swampy and Rupert in in the 43 over with an admirable 244 for 7 posted. Congrats again to all the batsmen as this was a great score against at times some great bowling, particularly from a young leg-spinning (could have been off-spinning) Yorath.

Rupert and Luke took the new cherry with Luke bowling an excellent line and length regularly with a little bit of away drift. Bowling against experienced senior players he bowled well for his 6 overs. Rupert meanwhile was building up his bag of wickets – sneaking one through through the gate and cleaning up their 12th Man Giant who tried to take out the 5.15 EasyJet Inverness to Luton first delivery and was adjudged LBW to take Rupert onto a hat-trick next over – which everyone forgot about.

Smudge struggled with length and unfortunately was bowling against the in-form and impressive young Mr Yorath who built up a sensational innings of 89 before being c+b Waters. With Yorath Jr out and some great camaraderie and support from all the Preston players the last wicket fell to end the Rebourn innings just 8 short of the Preston total.

Luke’s fielding probably also saved the match for us. With only 10 there were gaps everywhere so all credit to him.

Rebourn were great hosts and the game was played in the right spirit – a super tea and a beautiful ground in the Sunday summer sun. Lots of spectators and a few ‘Howzat’s!’ from passing cars………..perfect.

Sunday cricket is so important and we need to keep supporting it please Preston. Swampy was a question mark on Tuesday – he bags nearly a 100 on Sunday having only faced a few balls this season so far. Net result? – bat on ball, gets eye in and confidence builds for the Saturday league.

Next game in 2 weeks and I really hope we can continue to generate the sides please, Lads. Saturday Skippers and VC’s please push the Sunday games. Makes a few quid for the club too. Takes some effort so please support the Club’s Sunday cricket agenda. 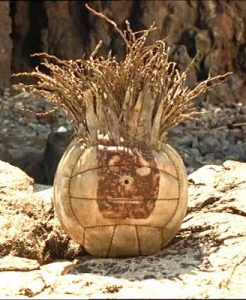 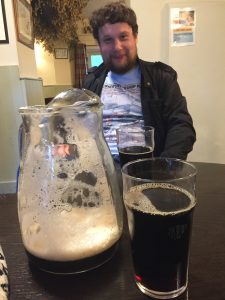 Swampy celebrates with a jug of mild. #hipster