Preston 3’s entertained their Hitchin counterparts on Saturday in an eagerly anticipated local derby – prior to the game, only one point separated the two teams.

Again, Head Groundsman, Pete Bobbins had turned Hitchin Boys School in to a ‘field of dreams’ with the wicket looking in good shape after the recent rainfall.

Skipper, Tom Maxwellian-House continued his fine tossing form and chose to bat first. Openers Martin Fierce and Juan Cabbarge touched cloth and wished each other the best of luck as they skipped happily out to the middle.

Fierce, as usual, showed early aggression looking to dominate the Hitchin attack, muscling the ball to the boundary, whilst Cabbarge took a more subdued approach to run scoring.

The first wicket fell as Fierce tried once too many to find the boundary and was bowled for a typically manly 24.

Cabbarge was then joined by Greig Burn. Both batsmen found it hard to reach most of the bowling, let alone hit anything. Cabbarge eventually fell for 30 in the 26th over with the score on 79.

Although Tom Burser blasted a couple of quick boundaries, he soon found himself back in the pavilion. Bobbins and a love struck Joe Riant managed to keep Burn company for a time whilst the scoreboard ticked over, but no one really had arms long enough to reach most of the deliveries that Hitchin sent down.

Burn upped the tempo but fell for 45 attempting a hop, skip and a jump down the wicket once too many and it was left to Will Burser and the skipper to get Preston to 192 for 6 at the end of their 53 overs.

As the overs ticked by, Preston mixed up their bowling options, but to no avail – Hitchin keeping up with the required run rate and timing their run chase to perfection as they got home with four balls to spare to win by 6 wickets. 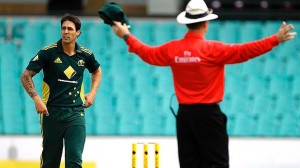 Hitchin’s bowlers aim another one at the next strip