Skipper Tom Maxwellian-House won the toss and opted to bowl first on a good looking wicket, and what an inspired decision it proved to be!

Maxwellian-House took the new ball with Dave Salon, who then bowling unchanged to dismiss Shenley for 128. No Shenley batsman could break free as Preston’s opening pair maintained an excellent line and length from start to finish. Maxwellian-House finished with figures of 26-8-57-7 to prove that dwarfism is no restriction to being a midget!
Salon continued his good form with figures of 26.1-4-67-2.

Preston’s innings didn’t start in a blaze of glory as opener Crabarge fell LBW (lettuce before wicket) for a duck. Tom Morris-Minor and Nigel ‘Real Deal’ Baggs then settled the nerves with a fifty partnership before Morris-Minor fell for 20. When Baggs went for 35, Preston still had some work to do, and who better to do that work than Preston’s very own Greek billionaire wine merchant, Paul Cantstopthejiggityboo. 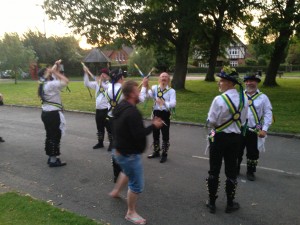 Tom Maxwellian-House celebrates with friends outside the Lion