Day of the Sams

A wonderful weekend for Preston was capped by a fantastic spell of fast bowling by Sam Crea and a thrilling first hundred for the club by Sam Penny.

Preston travelled to Ickleford on Saturday for a local derby in the Saracens Herts League Div 2A, and their Australian import Sam Crea was the hero as he demolished Ickleford’s batting with 6 wickets in a fine spell of aggressive fast bowling.

Preston were inserted on a track that offered exaggerated movement, but openers Warren Hearne and Will Gallimore set up a solid base to take the score past 50 for no loss. The removal of Hearne then saw a flurry of quick wickets before David Fleckney (22) and Pete Murrell (40) steadied the Preston innings. Although Preston initially had 150 in mind as a good score on a capricious track, they managed to reach 194 for 9 in their 50 overs thanks in part to the 51 extras accumulated by Ickleford in the field. Marsden was the pick of Ickleford’s attack with figures of 4 for 35.

Preston’s opening bowlers Sam Crea and Mark Waters then set to work. Waters struggled to find a good length early on and Ickleford’s Edwards despatched him for several boundaries. However, Crea’s pacey and aggressive spell was too much for the hosts.

Crea single-handedly demolished Ickleford’s top and middle order, returning personal best figures of 6 for 13. Waters chipped in with 3 for 25 and a run out, as Ickleford were bowled out for just 48. This comprehensive performance from Preston gets them back on a sure footing for the 2015 season, with encouraging performances in all departments.

Preston 2nds made their highest ever league score on Saturday, as they comprehensively beat visitors Hitchin 2nds by a massive 189 runs.

Put into bat, Preston’s top order built steadily around opener Matt Burleigh’s 62. The arrival of new boy Sam Penny changed the momentum of the innings upwards, as he launched into Hitchin’s attack with a parade of big sixes. Penny reached 50 from just 26 balls and then completed a fine hundred from 65 deliveries, enjoying a century partnership with Burleigh and another large partnership with Ashley Catlin (46*). Preston completed their 50 overs at a record 300 for 3, with Penny 114 not out.

Although Tim Porter made a valiant effort to attack Preston’s bowling with a succession of driven boundaries, Hitchin lost too many wickets too early to have even a sniff of victory. Porter’s run out as he sought the strike signaled the beginning of the end for the visitors.
Iain Williamson wrapped up the Hitchin innings with four quick wickets, and could have had a hat trick but for a dropped catch. Hitchin were all out for just 111 in only 28 overs, as Preston 2nds celebrated one of their finest ever league performances.

In a match reduced to 35 overs a side by rain, Preston 3rds struggled (as usual) to compile a competitive total on Southgate Compton’s notoriously poor wicket. Their 97 for 9 proved inadequate as Compton blasted their way to victory by 4 wickets in just 25 overs.

Preston 4ths entertained Letchworth 5ths at Kimpton on Saturday, as Hitchin Boys School was unavailable. The visitors were asked to bat first but posted a massive 257 for 4. Once again Preston bowled well for the first half of the innings but could not maintain the standard for the full 45 overs.
Preston made a brave challenge to get near the target with John Skirrow hitting a fine 80 and Dave Saunders 31, but ultimately fell well short on 187 for 8.

Preston’s development Sunday 2s travelled to the stunning Fairfield Park on Sunday 24th May, to take on the Saunders’ Army, Knebworth Blues.

Preston were fielding a blended team with some seasoned heads amongst young players from the Colts ranks including our youngest, 11 year old Ollie Catlin.

Blues took first knock and quickly set about the task. Preston young bowlers Moretti, Moretti, Willis and 11 yr old Ollie bowled 75% of the Preston overs and Blues reached 215 of 40. All the young Guys bowled superbly and with great control – a very positive display and all showing signs of real promise. Confidence in the field also grew and Brad Moretti’s throwing arm is something to behold.

After tea, Preston set about the target with great abandon. Opener Biggs was dismissed for LBW quite early and with that, fellow opener Luke Holt started to smear the Blues bowling around the place. Waters suffered a nose-bleed at No 4 but started to hit freely and clocked up 50 quite quickly, before holing out to Gill at long-on.

The youngsters displayed promise with the bat and it was a great lesson for them. Senior Catlin and Fleckney started to re-build after Waters’ departure and it was all looking good until Fleckney was bowled by Fernando. Preston fell short by 30 runs off their 40 overs.

A hugely enjoyable game with the young guns, all of whom were pushed out in front and didn’t disappoint. Healthy signs for the future and it gave all the senior players a great buzz seeing the grass-roots perform brilliantly.

Thanks also to Blues for being great hosts.

Preston comfortably won their Sunday friendly with FM Arthurs at the Field of Dreams. Will Gallimore top scored with 47 as Preston ran up 184-7 in 35 overs. FM Arthurs never got started in their innings and were dismissed for 66.

Not content with his six-fer on Saturday, Sam Crea smashed some of Preston’s more gentle bowling for 94 not out on Monday to lead Gambo’s XI to victory, as this annual fixture for once managed to beat the normally reliable Bank Holiday rain. Matt Burleigh made 66 not out for Preston in their 194 for 7, after Tom Maxwell had lost another bet to Sam by contriving to chop the ball onto his stumps as he sought a boundary to third man. Crea then treated Maxwell’s bowling with unusual respect to ensure he didn’t succomb to any forfeitures, before cashing in on more generous deliveries to give a happy Gambo Senior a good win over the club. Special thanks to Hannah for a lovely tea and all of Paul’s players for an enjoyable afternoon, despite the cold! 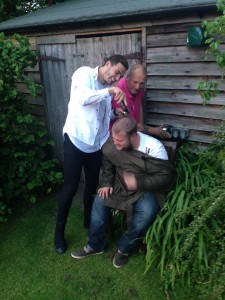