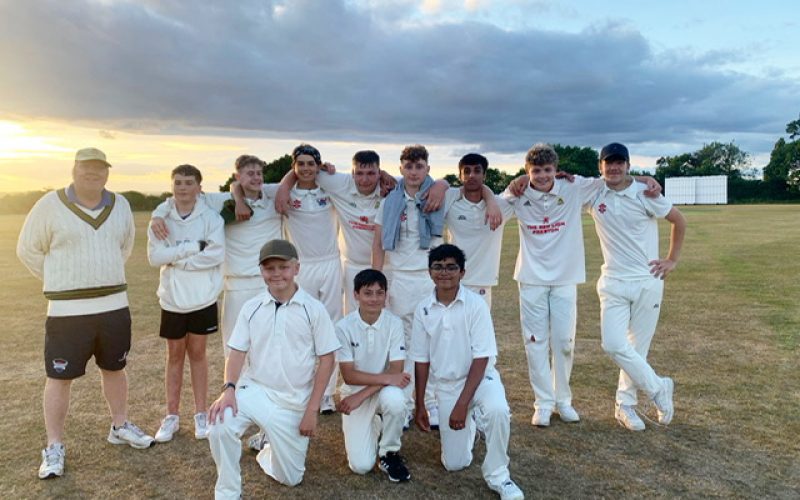 Preston First X1 draw against Dunstable.
Dunstable won the toss and elected to bat and made 246/9 in 60 overs. The Dunstable innings was anchored by Marcus Connor making 78 and supported by Sam Cherry who made 61. In the heat Preston took their catches and restricted Dunstable well. Ed Wharton bowled a 16 over spell to claim 4/67 and Anderson returned 3/52.
In reply James Stevens got the Preston reply off well making 46 and the momentum was continued with Jake George making 69 and Nivin Sathyajith making 47. A middle order collapse meant runs dried up and despite a fight back by Gallimore and Murrell the Preston innings got to 227/8 in 55 overs.
Preston Second X1 v Leverstock Green
Preston won the toss and elected to bat to make use of the fresh wicket. Despite a well made 30 by young Pushan Chakraborty opening up, the Preston innings was soon floundering losing wickets all too regularly. A late middle order fight by Skipper Fleckney (28) and Catlin (26) the Preston inning reached a well under par 144.
The Preston bowlers fought back well but it was birthday boy Bhavin Patel who took the fight to the Leverstock middle order claiming 4/28 which swung the game and Leverstock were bowled out for 125 in the 46th over in a nail-biting low scoring game.
Preston Thirds v Reed
Preston Thirds came unstuck versus Reed but still remain top of Div 9B
Preston electing to bat struggled with the loss of key wickets but Amit Rajani (37), Luke Ponder (30), Jacob Williamson (37) and Xander Bennet (16) ensured a total was posted as the innings finished on 152/8.
However Reed reached 155/8 in the 29th over anchored by a well made 65 by Reed’s Graves.
Preston Fourth X1 v Redbourn
Preston 4’s also came unstuck v Redbourn.
Redbourn, on winning the important toss, elected to field and bowled well to remove key Preston batsmen cheaply with no-one in the Preston line-up making more than 20 and the innings total crept to 129. Redbourn took their time but reached 131/9 in the 40th over in a closely fought game. Preston’s Ashby and Hamilton both claiming 3/25
Under-15’s
After a very successful season coming second in the Under15A Group 4 competition, the team lost to Broxbourne on Finals Day. Coach Ash Catlin is rightly hugely proud of the team and their performance this season and it’s brilliant to see many of the team now regularly playing for Preston’s senior teams in the Herts League.
Preston Juniors
Preston concluded their Junior Dynamos sessions and it’s been a fantastic few months introducing boys and girls into cricket. The club also entered both an U-9 team managed by David Fleckney and an U-11 team managed by David Clark and both teams performed brilliantly considering this was many players’ first ever experience of competitive matches. Junior Development Manager Gillan Ide has described the season as a fantastic success and hopes to see all of the players continue to develop their cricket awareness and grow through the club.