Colts final report of the season

The Under 11 season finished on a lovely day at Fairfield. Playing a mixture of the home side’s talented under 10 team and their under 11s, Preston won the toss and batted. The opening pair of Jacks saw us post 38 in the first ten overs with Jack M getting 20, before both retired. The next couple of Adam and Olly upped the run rate with some excellent running and powerful striking as they put on 104 in just under 10 overs. Olly retired on 53 and Adam on 38. The final 5 overs saw Oliver bat very well to score 15 and with Jude 5* and Frazer 2. The innings finished on 170/1 off 25 overs.

The opening bowlers of Joe and Tom started well and Joe got the breakthrough by removing both opening bats. Some sensible batting and some good bowling saw the run rate increase, so Alex was introduced and he immediately got a wicket caught by Adam. Alex then picked up a second thanks to a great reflex catch from Jack M. Oliver J cleaned bowled the talented Max, before Jude took off the gloves and got a wicket with his first ball of the season, clean bowled. Joe returned to get 2 wickets in 2 balls but just missed the hat trick. The innings finished on 117/8, with Jack getting 3 catches, a great final game.

The end of season awards night was held after the Presidents game and the following awards were given. 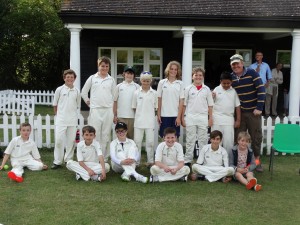