Ashley Catlin brings us his first report of 2016 on the Juniors early season matches:

Unlike last season which started in bright sunshine, this week’s start saw games played in darkness, bitter winds and some rain. Two games were called off due to the weather: the under 9s & 14s the unlucky teams.

Olly lost the toss and was inserted on a wet wicket with a soft outfield.  Scoring was going to be hard , Joe and Jack opened up and put on 13 before Joe was bowled for 4.  Olly entered the arena  and looked to up the tempo, as he pulled and drove, he found the boundary on 5 occasions before retiring on 32.  Jack carried his bat for 28 and Adam hit a run a ball 13 as the boys closed the innings on 97/1.

Pushan and Tom opened the bowling  with both taking an early wicket to dismiss both openers for ducks.  Olly then rotated the bowlers to use 9 of them as Adam took a couple of wickets along with Ben C as Datchwoth finished on 67/5.

On a horrendous night at Preston, Preston came off second best.  A few dropped chances cost the boys in the field as the top order all posted 30 for the visitors.  Preston started to get back into the game thanks to a run out and a wicket from Tom  as the innings closed on 124.

The reply did not get off to the best of starts as Ewan went early and although Luke and Olly C looked solid, runs were hard to come by.  Apart from Olly 15 and Adam30* we did not look like getting anywhere near the total, and in near darkness , the innings closed on 83/8.

Friday saw the under 10 team made up of mainly under 9s play their first hardball game against some taller lads and girls from Knebworth.  Batting first Jacob and Elliot were in attacking mode but lost four wickets in their overs.  Luke and Harry’s innings was a similar effort as we lost another 3 wickets.  Nathan and Nid came in next and Nid looked to play some excellent cricket shots and scored 4. Nathan did well in his pads for the first time.  Last up saw Arham and Freddie and they batted well to score 26 as Arham scored 15 and Freddie 4 as we finished on 213/9.

Bowling wise Jacob started off with a wicket  with the first ball, but the first KPCC pair batted well to get to 224/1. The next pair scored 7 thanks to a run out from Jacob. But from then on we could not get a wicket, although we bowled well with Elliot not bowling any wides and Harry and Freddie only 1. Knebworth finished on 262/2.  Special mention to Nathan who took the gloves and dived for everything, good effort boys. 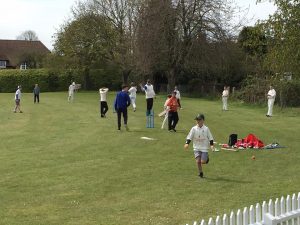