Preston’s first fixture of the 2016 Tour to Bath was at old friends Winsley. Once again a magnificent lunch was enjoyed at the Seven Stars, before we wandered over to our hosts glorious ground with its wonderful views across the valley to Salisbury Plain.

Birthday Boy (18th) George Constantinidi was appointed captain for the day, and with a full understanding of tour etiquette he had no hesitation in opting to bat after winning the notional toss. Alf Rehman and Mark Waters didn’t last too long, but Matt Burleigh and Justin Powick enjoyed the quick pitch and fast outfield. Bomber unveiled some never to be seen again powerful drives, and at 98 for 2 after just 10 overs Bomber’s nose was bleeding heavily. Powick retired after reaching 50, and although the skipper didn’t last long, Jack Morecroft picked up where he had been rudely cut off last year to complete his “century”. Bomber skied one on 40, but all the remaining batsmen had a dart, and Liam Kenna and Paul Constantinidi in particular enjoyed themselves as Preston posted an impressive 233 for 9 from their 30 overs. 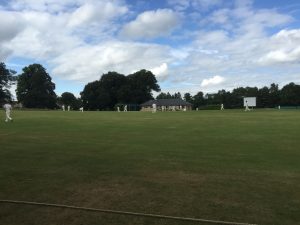 Winsley’s reply was just as positive, and they kept up with the required run rate until four tight overs of off spin from Birthday Boy George seemed to have brought Preston to the brink of victory. Special mention at this point to an astonishing one (left) handed catch by Justin Powick at long on, grabbing the ball at ankle height as he sprinted round. Winsley were left to score 20 off the final over from George. No pressure. Unfortunately the first two balls sailed for 6 and then a run out chance was fumbled, before a second was taken. But it was the wrong batsman as far as Preston were concerned. Still, 6 were needed from the last ball and all was set for George to be a hero.

Moments later Jack Morecroft was fetching the ball from the neighbouring meadow, and Liam was losing his hair to Justin’s clippers. Preston then enjoyed a lovely night out in Bath reminding George that he’ll never forget his 18th birthday.