The Third XI were the sole success of the weekend, racking up 300 as Greig Hearne made another quickfire ton. Match reports for Sat 28th and Sunday 29th May 2016.

Old Owens made 208 for 7 in their 50 overs at Preston on Saturday, with the wickets being shared by the Preston bowlers. In response, Justin Powick made 64 and David Fleckney 47*, but Preston fell decidely short of the target at 176 for 9.

Preston’s Sat 2nd XI lost their SHCL Div 5A match at Hatfield by 3 wickets. Chris Cole and Ashly Catlin (27) put together a third wicket stand of 76 in 19 overs to establish a foundation for Preston’s innings. The highlight of the total of 201-9 was Cole’s attractive 107, relying on sweet timing and admirable shot selection to post a first century of the season, with support from Callum Blair (20). Wynne (1 for 24) and Sofat (3 for 31) were the pick of the Hatfield bowlers.

Hatfield started quickly with opener Usman (30) unleashing some lofted drives to ensure that the hosts were always ahead of the required run rate. His run out by Liam Kenna’s direct hit began a series of regular wickets for Preston and, despite a number of missed chances, the visitors seemed on top having reduced Hatfield to 142-7. Enter Hasiza and Kumar, whose excellent 60 run partnership, waiting for and punishing the bad ball, was enough to win the game with 4 overs to spare. None of the Preston bowlers had their best day and a good chance to push up the league table was lost.

Preston 3rd XI’s astonishing batting form continued as they racked up their highest score of the season so far, 304 for 4 against Flamstead 2nds at Whitwell. Greig Hearne led the way with his second successive league ton (100*), joining an elite group of Preston players to achieve that feat including John Reid, Dave Saunders and of course Justin Powick in the Beds league this season. Hearne put on an unbeaten partnership of 179 with Paul Constantinidi, who finished with 58*. 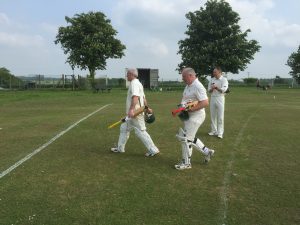 Earlier, openers Matt Burleigh (34) and Will Mercer (34) had got the innings off to a rapid start with a partnership of 81. Flamstead tightened their bowling to reduce the home side to 125 for 4, before Hearne and Constantinidi sensibly saw off the best bowlers and unleashed their fireworks.

Preston were a touch lackadaisical in the field to begin with, missing two catches behind the stumps off Bav Patel, and the Flamstead openers made them pay with a century partnership. One of those batsmen went on to complete a ton before being bowled by Burleigh. Iain Purton then picked up 3 wickets as Flamstead’s innings eventually fizzled out at 227 for 9 from 50 overs, giving the thirds another big win.

Preston 4ths visited the impressive second Reed ground and were asked to take first knock by their 4th team skipper. Tom Maxwell (42) and Chris Newell (79*) put on a solid opening partnership of 98, with club stalwart Newell carrying his bat. Captain Dave Saunders hit a brisk 35 and Terry Neale was unbeaten on 22 as 206 for 4 from 40 overs was set. This proved to be far too light a total on such a placid track, as the home team easily reached the target with only 2 wickets down and 3 overs to spare. They were aided by 5 spilled catches and a missed stumping chance resulting in a dissapointing 11 points only.

Having beaten Stevenage at their ground last week, it was Preston’s turn to be on the end of a thrashing as they hosted their revenge-seeking opponents at the Field of Dreams. Laurie Brown made 150 not out as Stevenage set Preston a challenging total of 245 for 6 from 45 overs. In reply, only Justin Powick (16), Louis Harrington-Smith (30*) and Jonathon Extras (14) made double figures as Preston collapsed to a sorry 80 all out and their first defeat in the Beds league this season.