Back down to Earth for Preston’s sides

Preston’s failure to bat their allocated overs cost them dear as they lost out by 2 wickets in a tense game against Radlett 2s in SHCL Division 2 on Saturday.

Radlett’s skipper had no hesitation in bowling first after winning the toss on a pitch that Middlesex had played on for the four previous days. Preston found batting tough and lost both the Stevens twins inside the first 3 overs. The removal of Hearne for (14) brought Ben Hill (25) together with David Fleckney (28) and with care and good sense they took Preston onto 71 for 3 by the 31st over. However, a mixture of some poor shots and good bowling saw Preston lose their remaining 7 wickets for just 42 runs, to be bowled out with 2 overs remaining for a below par 113. Only 3 batsmen had reached double figures.

Preston started well with the ball with seamer Mark Waters (3 for 26) picking up both openers inside the first 8 overs. Preston continued to chip away and got themselves firmly in the box seat as the hosts fell to 58 for 6 by the 23rd over, thanks largely to Henry Morecroft (1 for 28), James Stevens (1 for 18) and Max Anderson (2 for 13). However, Preston were left kicking themselves as somewhat out of character they dropped 3 important catches late on as Radlett got home by 2 wickets, to leave Preston wondering what another 20 runs would have achieved.

A weakened ten man Preston 2nd XI lost their important mid-table clash with visitors Flamstead in SHCL Division 5. Richard Gatehouse made a welcome return to form as his 74 helped the home team to 121 for 2 by the 31st over, which should have been a launch pad for a big score. Gatehouse shared a valuable stand of 80 with Jack Morecroft, who grafted hard for his first league 50 of the season. But after reaching 152 for 4, Preston’s middle order and tail collapsed horribly. They lost 6 wickets for 24 runs to be all out for 176 with 9 overs left, handing the advantage to Flamstead.

Despite a fine opening spell of 3 for 44 in 13 overs from Ollie Gallimore, Preston missed the accuracy of the ill Andy Riant and could not exert sufficient pressure on their opponents. Flamstead completed their victory for the loss of 5 wickets in the 39th over.

Preston 4th XI secured a backs-to-the-wall draw in their Division 11 East clash with Wheathampstead 3rds. Rupert Bruce took 5 for 50 as Wheathampstead made 217 for 7 in 45 overs. Preston were never really in with a chance of overhauling that target, but Chris Newell’s 40 helped them avoid defeat at 131 for 7 at the close.

Preston’s Sunday 1st XI were comprehensively beaten by newly crowned Division 1 champions Shenley Village in the Saracens Herts County Trophy semi-final. Shenley made 296 in their 45 overs, with Louis Harrington-Smith the pick of Preston’s bowlers with 3 for 51. But that total proved too stiff a target, and when Preston collapsed to 75 for 5 the game was up. Ben Hill made a defiant 50 but Preston were all out for 139 and left to dream of Cup glory for another year. 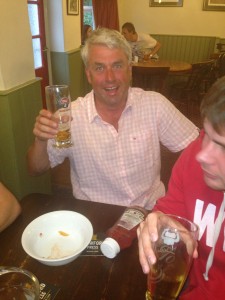 Rupert celebrates his league 5 for 50 for the 4th XI