With the first team in action at Cople there was a rare outing for the Sunday 2’s at home to Kings Cross Hookers, a travelling side made up of East Coast railwaymen. Fortunately they opted to drive and arrived on time to win the toss and bat first.

Sporting four Biggs’ in the team, Keith displayed his Devon over 50’s credentials with a mix of controlled pace and prodigous swing which yielded the first wicket at 45-1. KX skipper Liam Boone (30) struck some lusty blows until Luke Ponder removed his off stump, Luke repeating the feat twice more to return excellent figures of 6.1-2-16-3. With Smudger (1-38) holding down one end, Louis Biggs (2-26) Alex Williamson (1-15) and Tom Maxwell (2-4) shared the other wickets as KX took their score to 154 all out after 36.1 overs.

After a fine Preston tea, Louis Biggs and Alex W. made a good start to Preston’s innings with Louis crashing the ball to all parts of the boundary and Alex opting for the anchor roll. Louis avoided a jug when caught and bowled for 49 making way for the elder of two Ponders, Mark. Both he and Alex were in total control as they moved the score along, the only doubt being who would get to 50 first. Mark did the gentlemanly thing and allowed Alex that honour as Alex hit the winning run at 155-1 and reached his debut 50 for Preston – well done sir!

What a great advert this was for Sunday social cricket. Father and sons, brothers and uncles and occasional players, all enjoying a friendly game played in good spirit. Thanks to Kings Cross Hookers who played their part to the full.

More Sunday 2’s games coming up against Lilley and Knebworth Blues in the coming weeks. 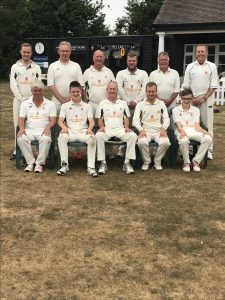 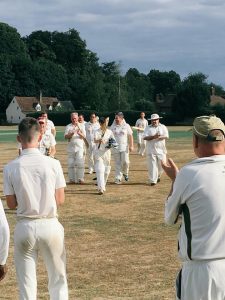