A weekend packed with Preston successes

Preston’s first competitive 20 over match for many years (possibly since the final days of the Cricketer’s Cup and John Barker Cup in the 1990s, long before professional T20 & the IPL was invented) resulted in a fine win at Eversholt’s picturesque ground on Friday night. It was also good to play once again against these old rivals after a gap of several seasons, and indeed this was a new venue for most of Preston’s young players.

Max Anderson won the toss and put Eversholt into bat, and the home side made a rapid start as Ben Nichols took a shine to Seb Walton-Adams and pasted a succession of boundaries. Eversholt were 51-0 after just 3 overs and a huge score looked ominous. But Casey Walker induced Nichols to sky a catch to Anderson, and Anderson himself bowled a miserly spell of 3 for 13 from 4 overs to set back the Eversholt innings. Eversholt’s middle order collapsed with a succession of poor shots to 81 for 8 from 12 overs, before the more experienced and sensible tail enders saw their side to 125 all out from the last ball of the innings. Louis Harrington-Smith finished with 3 for 17 from 4 overs of leg-spin, Casey Walker 2 for 24, and Liam Kenna took 2 catches and 2 stumpings behind the wicket.

Preston openers Tom Lincoln (27) and Will Gallimore (17) decided that there was no need to hurry after the total, and waited patiently for the bad ball. Pete Murrell (35) then upped the tempo of the innings with his “one shot” policy, which either went for 6 or he missed completely, before he holed out to long off. To be fair there was a second shot – an unnecessary reverse sweep middled straight to third man for a single. It was left to Ben Hill (28*) and Liam Kenna (14*) to see Preston home with 10 balls to spare.

In the next round Preston will host Aspley Guise, date TBD.

Preston were frustrated by the rain on Saturday afternoon. After dismissing their hosts Watford for 183, play was stopped for almost two hours by the weather. On the resumption Preston were set a smaller revised target, but the umpires soon declared the conditions unsafe and the match was abandoned with Preston 27 for 0.

Preston’s Saturday 2nd XI recorded their first Herts League Div 5A win of the season with a tense one wicket victory over West Herts 2s. Table-topping West Herts arrived at Preston on the back of two large batting totals and their early shot-making suggested they were confident of another until Casey Walker, bowling unchanged for 4-26, used the seaming conditions effectively, supported by Nick Jones (2-29) and some much improved Preston fielding. More vigilant batting from West Herts experienced middle order against Preston’s slower bowling nudged the total to 132-7 with five overs remaining but the tail was cleaned up without further scoring, Alf Rehman with two catches and some tight left arm bowling impressing on 2nd XI debut.

Preston’s reply started well enough at 43-1, with Chris Cole looking assured for 24, before the introduction of West Herts slow bowlers Mukhtar (3-21) and Hodges (1-11) turned the game in the Watford side’s favour. Bowling with good control despite the greasy conditions in persistent drizzle, they chipped away at the Preston batting line up, with only skipper Ashly Catlin (42 not out) able to build a longer innings. He found some support from Iain Williamson (17) and Jones (10) but each time Preston reached for the cruise-control button they pressed self-destruct instead and, after losing their 8th and 9th wickets in three balls, Preston still needed 3 for victory and the game was in the balance. Stout defence by last man Ollie Gallimore enabled Catlin to guide the winning runs to the third man boundary in trademark fashion, leading his team to the tightest of victories in a game that could have gone either way.

Preston 3rds racked up yet another big score, this time at Broxbourne 4ths, before coming unstuck thanks to a combination of a high class opposition batsman and the rain.

Batting first, Preston had to dig in after losing John Garnham (19) and Andrew Hedges (9) relatively early. Callum Blair was unfortunatley run out for 17 and it was 104 for 4 when Will Mercer fell for 16 in the 29th over. But Greig Hearne changed the innings with a barnstorming century full of fierce hitting combined with excellent shot selection. Hearne and Matt Burleigh (81) put together a partnership of 149 in under 20 overs, and Preston finished their innings at a seemingly impregnable 274 for 7 from 50 overs.

However, Broxbourne’s Charlie Willis, who had opened the bowling and taken 3 for 40, had other ideas. He and opening batting partner Imantha Silva quickly got going. Preston’s bowlers and fielders were not helped by the steady drizzle, which wasn’t heavy enough to stop the game but soaked the outfield, allowing the ball to speed to the boundary. It also made the ball into a bar of soap, difficult to control and hold. Nevertheless, Preston were convinced Willis was caught behind by Luke Holt off Louis Taylor, but Willis survived and took full advantage, plundering runs for fun. Preston’s bowlers tried hard, but it wasn’t until the late introduction of Will Mercer’s off-spin (2 for 35 from 7 overs) that they had much success. A close finish looked on, but Willis was seeing it like a football and his 158 not out won the game for Broxbourne with an over to spare.

Visitors Tewin 2nds chose to take first knock at Whitwell, and posted 225 for 7 in their 40 overs. Debutant Aaron Castle took 4 for 30 and Terry Neale conceded just 12 from his 8 overs. Preston’s reply was cautious before Graham Hull led the way with a splendid 86. But there was little support for him and Tewin prevailed by 24 runs in an exciting match.

After a week’s break, Preston continued their extraordinary start to their Beds County Cricket League campaign with victory at Stevenage. Justin Powick and Barry Turner got the Preston innings off to a flying start. Turner took full advantage of being dropped early on to make 58, but once again it was Powick who dominated, making his third Beds league ton in 3 matches and his 4th century of the season. Powick eventually fell for 122, but Pete Murrell (66) and Callum Blair (37) lifted Preston to an enormous 350 for 6 from 50 overs.

Stevenage also scored at a fast rate to spark a few nerves in the Preston ranks, but wickets fell regularly and they were all out in the 37th over for 217 to give Preston a commanding win by 133 runs. Louis Harrington-Smith was the pick of the bowlers with 3 for 50.

Preston CC hosted Knebworth Blues for their first Sunday 2nd XI / Development XI match of the 2016 season – a chance for younger players to step into senior cricket – and it saw Preston field a blended team with representative players from all levels of the Club.

Skipper David Fleckney won the toss and elected to bat and the Preston innings was opened by the formidable pairing of Matt Burleigh and David Clark – Clark making his first appearance after some years of injury and, frankly, more attractive Sunday lunchtime activities. 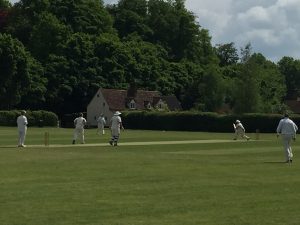 The Preston wicket proved to be quite slow and low which meant Blues hostile opening attack of Tom Maxwell and Terry Neale (both Preston players on a Saturday) made timing of the ball difficult. Both openers at first found the going slow as the bowlers bowled tight lines with quite a bit of nowse and guile. The more agricultural Clark started to swing the willow and surprisingly connected with a few too, and began to build a nice little platform.

The loss of Burleigh and the pulling up short of Clark taking a quick single having reached 50, created the opportunity for young Tom Chambers to take his first steps on the Preston ground alongside veteran pace bowler, Mark Waters. A highly unfortunate run out backing up at the non-strikers end meant that young Chambers’s technically brilliant and all too brief innings was cut short, but already there are signs that Tom will be a seriously fine player – playing some lovely shots and finding the gaps.

Waters rebuilt to reach 63, assisted by Fleckney in the middle order. 12 year old Ollie Catlin looked more than comfortable against the guile of Blues’ Mark Smith and Terry Neale, but holed out to the predatory Robbie Parry, who caught him at short mid-off. The other two youngsters, Tom O’Reilly and Taylor Morretti also played some brilliant shots and were unlucky not to get more runs. The Preston innings closed at 216 for 6 off their 40 overs.

The Blues reply started very well with the opening pairing of Tom Maxwell and Mark Smith, who put on 88 for the first wicket. Macca looked especially comfortable playing some superb straight drives and finding the gaps, and it was good to see his return to form. The introduction of leg spinner Ollie Catlin really put the pressure on the Blues middle order, and he returned impressive figures 3-42 from 10 consecutive overs. He bowled with incredible control for someone so young and while trying probably the most complex style of bowling there is with a senior ball. A hugely encouraging sign. Tom Chambers also kept wicket very well considering the wicket keeping low and slow, and took one particular sharp stumping off Ollie.

Taylor Morretti also bowled an impressive line and length in harness with the “evergreen” Fleckney, and both picked up wickets to make the game safe for the hosts. Preston’s wiley Smith also bowled with coiled experience to pick up a wicket in a shortened spell. Blues Dave Saunders, Gareth Taylor and Neale started to look threatening and put the pedal down but it was too late, and they closed their 40 overs on 178-7, giving Preston victory by 38 runs.

A really enjoyable game for all concerned and the feedback from the crowd and the always friendly Blues side was highly complimentary about our younger players and their performances.

We must remember that the purpose of these games, at least as far as Preston is concerned, is to make sure we have runs on the board to help create a comfortable platform for the young players get the chance to contribute in all areas.

A win is always the intention of course, but the bigger picture is about creating an environment for younger players to learn the game, and to listen to and play alongside seasoned players. In areas like calling, running between the wickets, learning to ground field, etc., this format is by far and away the best for practicing skills taught at Sunday morning Junior sessions. If we can’t offer that as a Club, we lose all the momentum as our senior sides just get older. We hope our opposition, whoever it maybe, also get that. We can always call on the senior players to bowl a few overs or bump up the order if needs be – but that usually backfires anyway!

We may lose a few games, too – it’s highly likely – but just from the quick view of younger players playing this Sunday, it’s a really, really encouraging sign for the Club’s future. We hope we can get more senior players involved for future games – it’s an odd feeling playing with someone half your size but who’s already better than you.