Preston’s new Australian star Justin Powick made a dream start to his season, scoring 73 in a friendly on Saturday against Old Albanians, and then exactly 100 as Preston won their debut game in the Greene King Bedfordshire County Cricket League on Sunday. 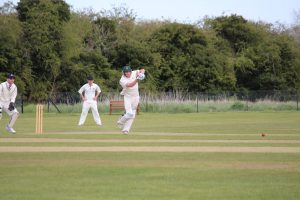 Eaton Socon were Preston’s initial Beds League Divison 2 opponents and hosts, and they put the visitors into bat on a slightly damp surface. Despite the early loss of Max Anderson, Preston made steady progress as Powick batted with confidence and good sense, strongly supported by Will Gallimore. Hailing from Melbourne, where he plays 1st Grade cricket for Northcote, Powick showed his class by using his feet to good effect against Eaton Socon’s spinners, and pulling a couple of huge sixes when the bowlers dropped short. Gallimore had made 57 when he dragged a delivery onto his stumps, but Powick completed a league debut century to the delight of his new teammates. Unfortunately, Powick was immediately bowled trying another aggressive shot, but Preston’s remaining batsmen managed to lift the total to 228 after 45 overs, with Callum Blair cleverly piercing the leg side field to make 24 in just 12 balls. 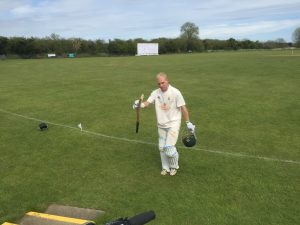 Eaton Socon’s chase mirrored Preston’s innings, as an early wicket was followed by an impressive partnership that threatened a heavy defeat for the visitors. But having reached 152 for 1 after 25 overs, Socon’s innings fell away as Preston’s slow bowlers restricted the run scoring and the outfielders held their catches. Skipper Pete Murrell finished with 4 for 44 and Mark Smith 2 for 49 as Preston dismissed their hosts for 212.

On Saturday the 1st XI made 206 for 5 in 40 overs at Old Albanians in a pre-season friendly victory. Justin Powick made 73, ably supported by Will Gallimore with 54 and David Fleckney 42*. Casey Hughes then grabbed 3 wickets as Old As were dismissed for 168.

The 2nd XI bowled well at home to restrict Old Albanians 2nds to just 139 for 7 in 40 overs. Debutant (and Old As old boy) Tom Lincoln then gave Preston a fast start with 25 in the first 3 overs of the innings, but his dismissal to a top edged pull shot saw 4 wickets fall in just 6 deliveries and Preston went to tea at a wobbly 40 for 4. Matt Burleigh (18) and Louis Harrington-Smith steadied the ship after the break, and after Burleigh’s dismissal to another top edge Andy Riant (25) and Ashley Catlin helped LHS (47) see the Twos home with 5 overs to spare.