A Saturday to forget for Preston

When Waters is away the lads will play…..not quite as well as usual…

Saturday was a bit of a day to forget as all four Preston sides fell to defeats in the Herts League.

A sub standard batting performance from Preston cost them dear as they lost out by 3 wickets in a tight contest at Northwood in Herts Division 2A.

Electing to bat first in friendly conditions Preston could only muster a well below par score of 133 all out, with only two of their batsmen making double figures, Will Gallimore scoring a fine 69 and Warren Hearne 14.

Initially, Preston set about bowling out their hosts out in fine fashion with paceman Sam Crea (15 overs, 5 for 17) removing Northwood’s top 4 in quick time to give his side hope of victory. However some sensible batting from Northwood’s middle order pair of Sergeant and Woon-Sam swung the game back in their favour, as a flurry of half chances went begging. Northwood completed victory in the 53rd over with 3 wickets in hand.

Friday night’s spectacular thunderstorm left the Field of Dreams drenched, and the heavy rain got under the covers to spoil the expected “road” after last week’s heatwave. Instead, the 2nd XI’s batting failed to cope with the damp track and some fine bowling as they fell to another defeat in Div 5A.

Skipper Ashley Catlin won the toss and sent Hatfield Crusaders into bat, expecting wickets to tumble in the conditions. Instead, Crusader’s openers batted patiently and sensibly in a stand of 71 across 30 overs to give their side an excellent start. Long time Preston rival and Marcus Baines look-a-like Kevin Whitehead led the way for Crusaders until he chipped a return catch to Andy Riant, who then got stuck into the visitors middle order to take 5 for 37 in his 15 overs. Preston’s fielding was also vastly improved from the previous week, with good catches being held by Casey Hughes, Callum Blair and Matt Burleigh at slip. Burleigh also rolled back the years to his indoor cricket days with a sharp pick up, turn and throw from midwicket, keeper Jack Morecroft neatly completing the run out while Preston’s veterans muttered various sarcastic words of astonishment. Preston took the ten Hatfield wickets for just 62 more runs to dismiss the vistors for 133 (Catlin 3 for 30), and giving strong hopes for a solid victory.

Instead, Hatfield’s opening bowler Mukesh Kumar (6 for 19 in 12 overs) destroyed Preston’s top order in a fine spell of full, straight deliveries that hurried the batsmen. It was a great demonstration of how to bowl in the damp conditions, and only Iain Williamson (22) coped well, before he mistimed a full toss back to the grateful bowler. A frustrated captain Ashley Catlin did manage to smash a square cut to the boundary, but only after he’d chopped the ball into his stumps. The dressing room felt the full force of his fury….

At 69 for 8 Preston thought they had little chance left, but Mandeep Khurana had other ideas, belting the bad balls he received to the boundary in destructive style, including one huge six into the middle of Ricky’s prize stinging nettles. Unfortunately, he ran out of partners and at 92 all out Preston were well beaten.

The Twos reach the half-way point of the season close to the relegation zone, and urgently need their batsmen and bowlers to find stronger form for the remainder of the summer.

The Thirds visited Hertingfordbury’s pretty ground and felt they were in a strong position after making 226, Simon Luxton accumulating another 50, although they felt they should have scored more. Hertingfordbury chased down the total for the loss of 5 wickets with several overs to spare.

Preston 4ths inserted Datchworth 3rds at HBS and saw only 4 wkts fall as 255 was posted in 39 overs.In reply Preston were 50 runs short, Terry Neale (41) top scoring. Next best was Dave Saunders with 34 and Neill Pomeroy and Sam Singh made twenties.

Roving reporter Mark Waters catches up with the club’s visit to the next village, Whitwell:

A nicely balanced mixed team travelled to neighbouring cricket club, Whitwell CC on Sunday. With the main Preston square being used for a highly successful Preston CC Juniors Event, we took the opportunity to bring a mixed Preston CC team together and enjoy a day’s non-league, friendly cricket.

Skipper Pete Murrell lost the toss and Whitwell took first knock on a pitch offering some movement but with the home advantage. Paceman (! – Ed) Rupert Bruce had the bit between his teeth as he ripped through Whitwell’s top order to take a quick 4-fer, brilliantly supported in the field with Smudger unbelievably snaffling 3 catches off this new ball burst. The Chairman lurked with threat at Gully but couldn’t be kept out of the fielding action with a diving catch to claim Brucey’s 4th in an incendiary opening spell.

Young Charlie Piper, making his Preston CC debut, came on at the other and bowled with great skill and composure for someone so young, which shows tremendous promise for the future, and was unlucky not to take a scalp. The wiley Smudger then came on after Bruce was put out to paddock and was soon amongst the action with catches from Skiddsy (sic. – ie Pete Skeels – another Smudgerism – Ed), Nigel Biggs and now Bruce who refused to be kept out of the action by repaying the favour and snaffling 3 catches for Smith in a catching / fielding frenzy.

Tom Maxwell and George Constantinidi both chipped in with a wicket with young Will Mercer also taking a catch. Charlie Piper then came on for a second short spell to take a final wicket with the unstoppable Bruce once again taking quite an amazing catch at long-on..! Whitwell were all out 148 and every wicket was quite unbelievably a taken catch. 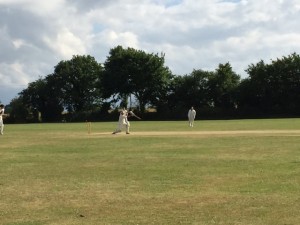 The Bruce misses one at Whitwell 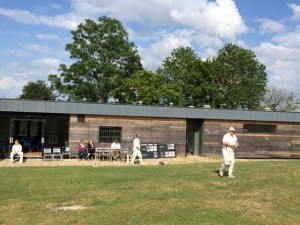 The Chairman makes his way out to bat …. 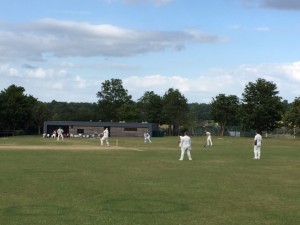 ….And plays a fine back foot stroke

A great tea was had and Mercer Jr and Skiddsy were invited to don the pads up first for Preston’s chasedown. Both made good starts after some tight bowling from the Whitwell openers but Mercer missing a straight one and Skidds was shortly taken down for 16. The Chairman schmooed a quick fire 22 and Bruce looked good but was cleaned bowled before troubling the Scorers which didn’t help his MOM potential.

Big Pete Murrell took control from the front and built an impressively controlled 42 before trying to change the course of a WhizzAir flight on final approach from Warsaw by smacking a ball into the fuselage, but instead missed the ball completely. Enter young Piper who had a great make-up but a full-bunger surprised him and he hit down wide mid-on’s throat.

Henry Morecroft’s younger Brother Jake batted excellently for 24 with some exceptional cover strokes for a red-inker. However, showing impressive potential, it was young Constantinidi (G) who decided that the game had taken long enough and the pub was calling so he despatched 2 sixes and a powerfully driven four into the boundary to win the game for Preston in impressive and brutally conclusive fashion.

A perfect game with excellent hosts and all played in the right spirit. Thanks Whitwell – see you in a few weeks. 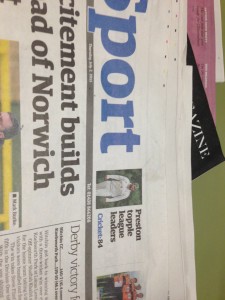