Torrential rain put paid to Preston 1st XI’s home fixture with Abbots Langley, which was abandoned without a ball being bowled.

Preston’s 2nd XI fixture at Old Cholmelians in SHCL Division 5 faced a considerable reduction in overs after a lengthy delayed start. The home side attempted to score quickly in damp conditions that also hampered Preston’s fielders, with a number of catches slipping through cold and wet hands. None-the-less opening bowler Ollie “Krony” Gallimore managed to keep OCs in check, taking all 6 wickets to fall (for 57 runs) as OCs reached 114 for 6 from 31 overs when the rain returned. With prospects for completing the game looking bleak, both teams shook hands and went away with ten points each for an abandoned match.

Preston’s 3rd XI went down to a heavy defeat at Flamstead 2nds. The home team batted first and made 152 for 7, with Dave “Mad Dog” Allen taking 6 for 61. The total proved too large for Preston, who collapsed to 108 all out in reply.

Preston 4ths had a pleasing victory over Baldock 3rds. Captain Dave Saunders chose to bat first and led the way with 64, backed up by Waqas Azad (37), Chris Newell (30) and Matt Benjamin (25) as preston declared at 202 for 6,  leaving the visitors 40 overs to chase down that total. However, Baldock were bowled out for 137 with Rob Parry taking 3 wkts, and two apiece for Newell and Waqar Ahmed.

Preston’s Sunday 2nds faced another challenging match in the Chess Valley League Division 7. Despite only having 9 men, visitors Finchley 2nds fielded a superb bowling line-up, including a young purveyor of doosras, recently arrived from Trinidad, who gave veteran Dave Fleckney and co a torrid time. He was a little too thin to be Sunil Narine but the comparison wasn’t too far off. John Skirrow is probably still scratching his head wondering how that delivery bowled him, while youngster Jake Cook possibly won’t see a ball turn that much again for a few years. Fleckney used all his experience, and a couple of big 6’s, to see Preston to 93 all out. Mark Waters and Tom Maxwell then bowled well in tandem to reduce Finchley to 49 for 3 after 16 overs when torrential rain washed out the match.

As the rain pelted down at The Field of Dreams, Smudger was heard to comment – “They’re looking at the rules about John Lewis …….” 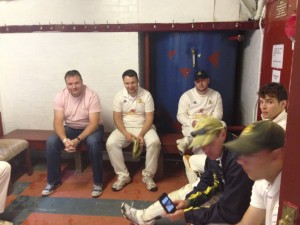 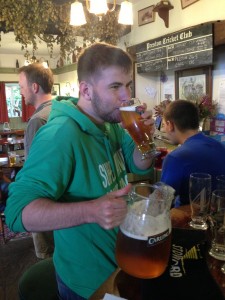