4ths take the honours as 1sts and 3rds draw

Thanks to Jack Morecroft for this week’s 1st XI report:

Preston faced Watford Town at home on Saturday looking to bounce back from their narrow defeat the previous week at the hands of Bishops Stortford.

Despite losing one of their most consistent performers and number 3 batsman Jack Stevens to injury on the morning of the game, skipper Max Anderson made the right decision following the coin toss and elected to bat first on what was easily the hottest match day of the summer thus far.

Openers James Stevens and Jack Morecroft got the side off to a steady start at 30-0 through 12 overs after some early accuracy from the Watford attack. However, it was the introduction of spin that began to cause the Preston order some problems – a promising start soon became 53-3 with Essex 2nd XI’s K. Ali’s leg spin taking care of Morecroft and the in-form Daniel Plumb. After Stevens was the victim of an unfortunate mix up with Murrell when looking set on 27, Preston looked to two of their more experienced players in Ben Hill and Peter Murrell to rebuild the innings.

The pair batted quite brilliantly in a partnership of 97 for the 4th wicket, each complimenting the others style; Murrell manipulated the field in a series of deft cuts and sweeps, whilst Hill drove down the ground elegantly. Murrell was caught at square leg for an impressive and mature, 50 having been moved up the order to number 3.

Having lost his partner, Hill, with a point to prove from the previous week, batted beautifully to bring up his 100* with a six and a four in the final over. The knock provided the impetus for Preston to press for maximum batting points, which they duly reached, finishing 238-8 from their 53 overs.

The Preston attack then set about chasing some early wickets to force the issue against the Watford batsmen, but were met with some fairly defensive batting, once James Stevens had the impressive Ali caught behind for 17. Whilst Preston did well to restrict Watford through the spin combination of Anderson and Murrell, they struggled to find penetration in the middle overs on a docile wicket. It took the earlier partnership of Hill and Murrell to combine again for the stumping of J. Shah (26).

Skipper Anderson then reverted to his seam attack with orders to bowl full and fast, knowing wickets were needed to force the win – and they very nearly delivered. Blake Mills (8-1-45-3) and James Stevens (11-4-31-4) came together to blow through the middle and lower order in a hostile 6-wicket burst, leaving Preston with one over to take the required 2 wickets for victory. Despite a very close LBW appeal, number 8 Ravi Panchal saw out the final over to close the Watford innings on 178-8.

Another impressive display from Preston at home, which really deserved a win but sadly, fell just short. Plenty to build on, however for the rest of our 53/47 campaign, starting with Holtwhites away next weekend. The side know they have all the ingredients to really compete this year and with the league still so tight it’s vital they keep putting in performances to stay in the hunt.

While the club’s other three Saturday XIs bossed their Herts League fixtures, Preston 2s crashed to their worst defeat of the season, losing by 7 wickets at Leverstock Green.

A changed line-up was second best in all departments, producing a limp display just when some backbone was needed against one of the league’s better sides. Choosing to bat first on a fast-scoring ground where 240 is a par total, Preston subsided meekly to 64-5, with only stand-in opener Casey Walker (19) hanging around for long. Alf Rehman (35), batting at 6, seemed equipped to withstand the home bowling, amongst which the pace of Matthews (3-26) and spin of Iqbal (3-22) were prominent, and he received some lower order support from David Clark (14) and Casey Hughes (17) as Preston posted 146 all out.

In reply, Leverstock Green were bolstered by an aggressive 48 from 35 balls by veteran opener Tyson, with Hughes especially roughly treated. Quick wickets for Andrew Riant (3-37) gave some encouragement to Preston, with good catches by Waters and Clark, but other half-chances were spurned as the determined home batsmen made sure of victory with 23 overs to spare, Preston wilting in the afternoon heat.

Preston 2s are at home to top-of-the-table Hatfield this coming Saturday.

With their seconds clearly strong, Leverstock Green’s 3rd XI were able to field their strongest side of the season so far and give the thirds a hard fought match at Parminters School.

In stifling heat, skipper John Garnham lost the toss and LG sent the Ps out to field. Missing the usual opening pair of Bhav Patel and Iain Purton, and with Iain Hamilton injured but volunteering to umpire for the day, Preston’s bowling attack was led by Ollie Gallimore and Tom Maxwell.

No sooner had Tom had a confident caught behind appeal turned down, than he trapped the same batsmen LBW. At the other end, Ollie G hit the top of the number 3’s off stump to boost his confidence. Preston’s hopes were high as wickets fell steadily, and at 95 for 6, with Ollie Catlin and Paul Constandinidi each having grabbed a wicket with their spin, Preston thought they could wrap up the innings for a below par score.

But LG’s lower order proved to be better batsmen than many in the top half, and as the hot afternoon wore on, the ball became soft and runs flowed. Iain Williamson did his best to keep things in check with a marathon 15 over spell that eventually yielded figures of 4 for 47, but it was Tom Maxwell’s return that brought the innings to a close, and he ended with figures of 3 for 46 as LG finished at 224 all out from 50 overs.

Preston’s innings started dramatically as Matt Burleigh fended a nasty lifting delivery in the 1st over to 2nd slip, but the ball had come off his arm and he was reprieved. Unfortunately Martin Pierce was then adjudged LBW, but he stayed out to run for the injured Simon Luxton. Lucky was soon in the runs, and he and Bomber added 77 for the 2nd wicket to give Preston real hope that they could chase the target down. 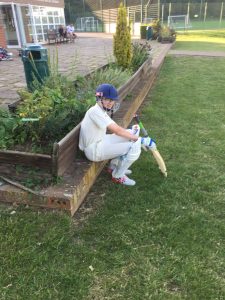 Burleigh then fell for 25 to a fantastic one handed catch by silly mid off from a full blooded drive an inch above the turf, and a distracted Lucky was immediately bowled for 31. Indeed, LG’s fielding proved to be the main difference between the sides, as their young players threw themselves around and cut off a good number of runs.

Iain Williamson (16) and John Garnham (26) dug in, as later did Greg Hearne (20) and Paul Constantinidi (26). All played some fine shots against loose deliveries, and slowly the target inched into view.

But when the 8th wicket fell the decision was made to take the draw and maximum bonus points. 13 year old debutante Alex Williamson nervously sat on the sidelines waiting to see if his best Geoffrey Boycott impression was needed, but in the end Tom Maxwell and Ollie G played out the game with Preston a tantalising 14 runs short of victory.

The 4ths travelled to Potters Bar on Saturday and stand in skipper Pete Robbins chose to take first knock on winning the toss. Graham Hull top scored with a brisk 47, and the next best was a sold knock of 27 from Robbins. Dave Saunders also made 17 as 163 all out in 39.3 overs was achieved. In reply Bar had no answer to the accuracy of Hull, who returned tremendous figures of 5 for 11 off his 8 overs. Young Joe Clark got an early breakthrough also and chipped in with 3 wickets, leaving Luke Ponders’ direct hit run out to see the home side crumble to 81 all out.