4th place for the Ones, and highest ever league position for the Twos!

A great weekend for Preston as the 1sts finish 4th in Division 2, their highest position since 2005, while the 2nds secured their highest ever placing in the SHCL!

After being asked to bat first Preston coasted along with relative ease,  reaching 104 for 3 by the 24th over, with James Stevens (38) and David Fleckney (28) the main run getters. The introduction of spin by  Cockfosters saw predacious turn and bounce and Preston’s batters then struggled to score with any fluency. However, late flurries from Chris Cole (27) and Pete Murrell (24*) allowed them to reach a decent 169 all out.

Preston’s opening bowlers Mark Waters (4 for 27 from 13 overs) and Henry Morecroft (2 for 27) ripped into the hosts top order and reduced them to 6 for 3 by the 6th over, laying a great platform for Preston to achieve their 10th victory of the season. Preston’s spin twins Max Anderson (2 for 35) and Pete Murrell (2 for 5) proved the same handful as Cockfosters’ spinners, and they combined to dismiss their hosts for 99 in the 35th over.

Preston 2nd XI lost their final match at home to Cockfosters 2nds, but none-the-less finished 10th in Division 5, their highest ever position in the SHCL. Skipper Ashly Catlin asked Cockfosters to bat first and the visitors, who needed a win to avoid relegation, set about batting in a very positive fashion. Paceman Finlay Connah was unlucky to have a catch dropped and an appeal for a gloved catch behind the stumps turned down, and Cockfosters had raced to 70 before skipper Catlin made the first breakthrough thanks to a fine catch by Iain Williamson. Wickets then began to fall steadily, with Williamson picking up 2 more catches and Catlin eventually taking 5 for 45. But Cockfosters’ great start allowed their later batsmen to confidentally take the score to 200 for 9 at tea.

Preston’s innings got off to a poor start with 2 wickets falling cheaply, but Barry Turner (66) and Richard Gatehouse (25) scored quickly to put the visitors under pressure, until both managed to chip catches to deep mid-off. The introduction of spin on a pitch that was becoming slow and low in bounce then fatally undermined Preston’s chase. The lower order had to settle for scoring as many bonus points as they could, and were finally dismissed for 157 in the 45th over.

Preston 3rd XI finished a disappointing 14th in Div 10 after a narrow one wicket defeat by Hatfield & Crusaders 4th XI. Tom Murrell (34) top scored in Preston’s 131 on a dodgy pitch, but Crusader’s last wicket pair managed 16 crucial runs to see their side to victory. 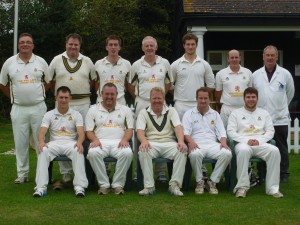