A stunning bowling performance from Preston 1st XI saw them emphatically defeat the league leaders Hemel Hempstead 2s on Saturday at the Recreation Ground. Skipper Warren Hearne had no hesitation in asking the visitors to bat first on a wicket that had been affected by the heavy overnight seeping under the covers. Hemel never came to terms with the accuracy of Preston’s opening bowlers Mark Waters (3 for 18) and Henry Morecroft (3for 16). They collapsed to 27 for 6 by the 16th over, with a suicidal run out and some poor shot selection not helping. Then left arm fast bowler James Stevens destroyed Hemel’s tail in a four over spell of 3 wickets for 0 runs, and Preston had dismissed their visitors by the 26th over for the amazing low total of just 38.

Preston had little trouble in chasing down their victory target in 11 overs for the loss of 1 wicket. Jack Stevens (19*) along with his twin James (16*) guided Preston home and to 4th place in SHCL Division 2, with a real opportunity now to challenge for the title.

Preston 2nd XI’s good form also continued with victory at Watford Town 2nd XI. Preston won a crucial toss and opted to bowl first on a damp track. Andy Riant (3 for 37 in 19 overs) was the pick of their bowlers as Watford ground their way to a potentially testing total of 151 all out in 51 overs. Once again some imaginative field placings, together with a few injudicious shots, aided Preston’s bowlers. Tim Stevens took 3 excellent catches, LHS grabbed a sharp chance at leg slip off Riant, and Ollie Gallimore gleefully clung on to a spinning skier. Nick Jones continued his Botham-esque ability to conjour wickets from innocuous deliveries with 2 for 17  in 5 overs, and Ashly Catlin grabbed 2 victims to finish off the Watford innings. Stevens, Finlay Connah and Gallimore also took a wicket each.

Preston’s reply began brightly with confident opener Barry Turner once again making crucial early runs (47), but when Preston slid to  88 for 4 Watford still felt they had a chance of victory. However, the big hitting Tim Stevens (45*) joined skipper Ashly Catlin (27*) in a match winning partnership of 66 to give Preston 2s victory by 6 wickets.

Preston 3s travelled to lowly Parkfield & Headstone looking for a victory to maintain their slim hopes of promotion. Skipper Maxwellian-House won the toss and chose to bowl first on a greenish looking wicket. Preston started well, Maxwellian-House sharing the new ball with Garbage, both allowing few scoring chances for Parkfield to gain any momentum. Backed up by the vastly experience Bob Fearn and the young off spinning pair of Will Mercy & Greek U17 beach volleyball sensation, Georgios Constantinopolopolis, Parkfield struggled to 167 for 8 at the end of their 53 overs.

Preston’s innings started with great expectation as the in-form pair of Martin Fierce & Grieg Grecian took it in turns to swish and swipe at the new ball like Zorro on speed! Things became too hot for Grecian as he took one swish too many and was eventually bowled for his top, and only score of the season, 9! Tom Vauxhall-Chevette then revved up his engine to join Fierce, the former a tranquil contrast to Fierce’s continuing aggression. With a tickle here, and a clip there, Vauxhall-Chevette finally got into gear. When Fierce departed for 26, former University Challenge finalist, Ian Spurton joined the now motoring Vauxhall-Chevette and put on a highly intelligent partnership of 103, which ended when Spurton fell for a well made 62. Vauxhall-Chevette managed one final push up the steep hill to see Preston home to a 7 wicket win, finishing unbeaten on 49.

A walkover for Preston 4th XI, after Hatfield & Crusaders 5ths failed to field a side, gave the club our first “Grand Slam” maximum 120 point Saturday of the season! 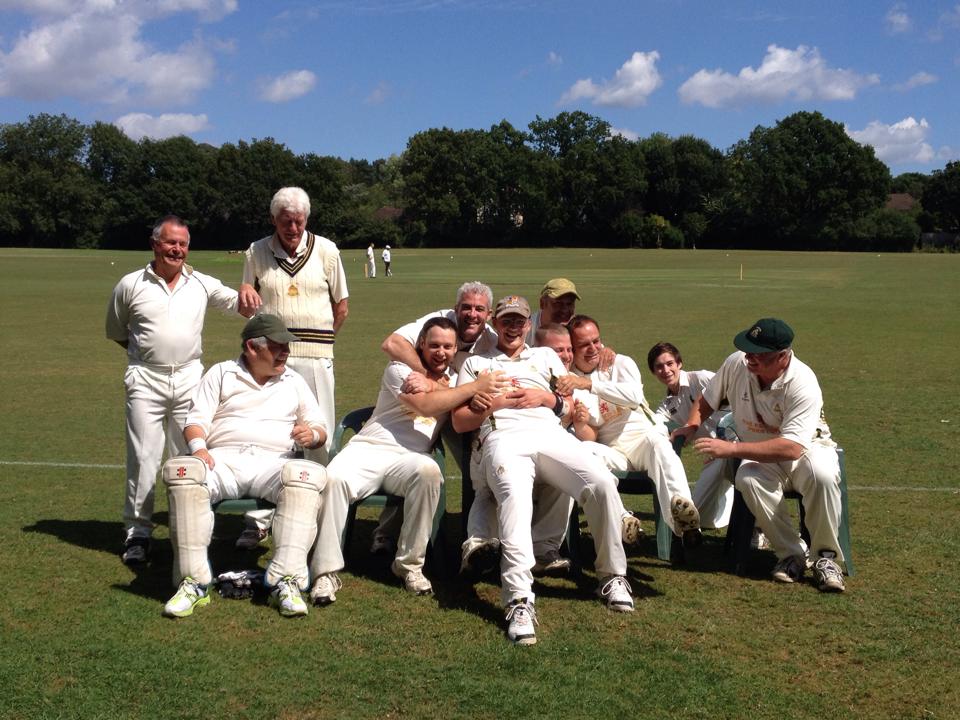 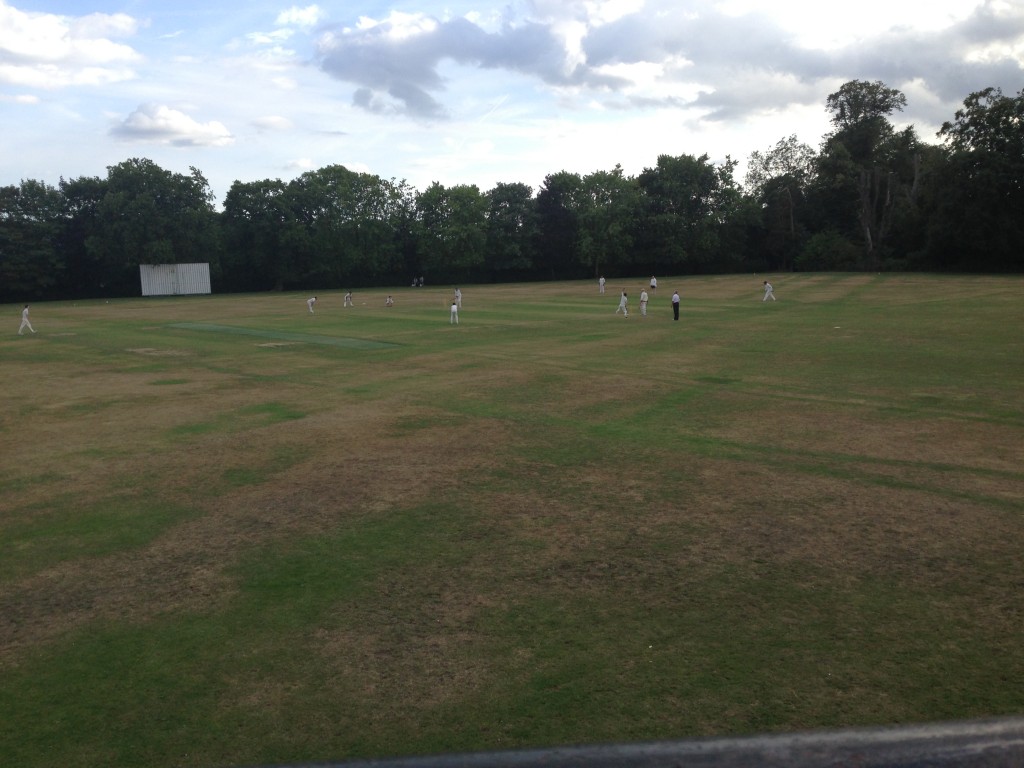 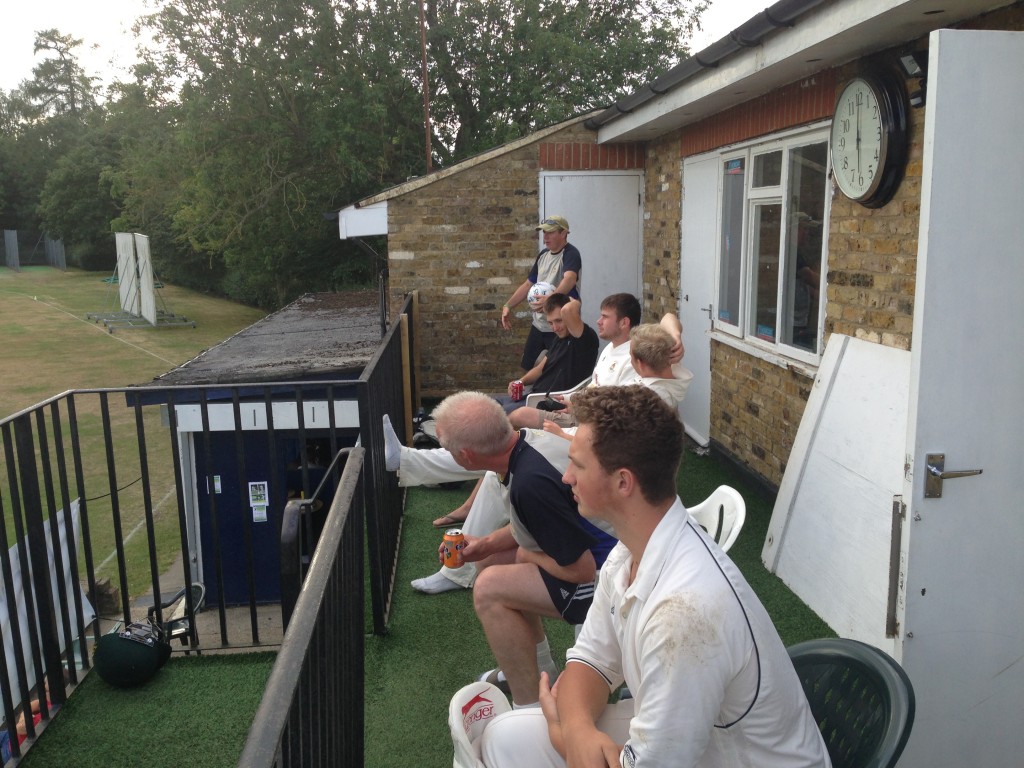 Tim Stevens awaits his turn to bat on the Watford balcony