3rds win title as 1sts give themselves a chance

The Thirds win the Div 10B title, the Firsts give themselves some hope in Div 2A, and the Sunday Ones finish 3rd in Beds league Div 2 after another century from Justin Powick. Match reports for August 27th/28th 2016.

The 1st XI are still in with a shout of promotion after defeating St Margaretsbury on Saturday, and seeing rivals Old Owens and Abbots Langley both lose. The 1sts will need to win their final fixture next Saturday against leaders Harpenden 2nds, and hope Old Owens score 8 or fewer points.

Pete Murrell took 5 wickets as St Margs collapsed to 152 all out, losing their last 6 wickets for just 4 runs. James Stevens then hit 87 not out to take Preston to victory.

Vice-chairman Mark “Melons” Waters sends us this missive from the Twos:

Preston 2s entertained Radlett 3s in their penultimate league clash of the 2016 season.

The team’s successful season in Div 5A is nearly at an end with hopes of gaining a promotion spot in Div 5 all but faded away, but they wanted to finish on a high and the Radlett fixture was always a must win.

With regular Skipper Catlin away and regular Vice-Skipper Riant on crutches, the game was entrusted to ex-1s Skipper Warren Hearne.

Losing the toss, the hosts were inserted on a green top which looked like it would offer the visitors some help with the new ball. Hearne was back in the pavilion quickly having unfortunately been run-out at the non-strikers end as fellow opener Cole smeared a drive straight back and clipped the unsuspecting bowlers hand.

Cole then proceeded to construct a typically spirited innings, falling short of his half century. However at 50-3 off 10, with Blair also run-out early doors, Preston’s brittleness threatened to take hold.

However, it was the innings of Alf Rehman and Nick Jones that really swung the game for Preston. The pair batted superbly, unleashing powerful front and back foot strokes dispatching Radlett’s bowlers around the ground. Both made decent scores (74 and 84 respectively) and put on around 170 for the 4th wicket, relishing the opportunity to bat higher and making the most of the opportunity.

After Rehman and Jones fell finally, the mantle was taken up then by Pete Williamson who also made an effortless 40. Preston closed their 50 overs on 289-6.

After tea, Preston opened their attack with Waters and Ollie Gallimore who picked up a wicket each but were loose on occasions and the Radlett top order started to cash in.

Darren Goldsmith came on to also pick up a wicket (as well as a screaming run-out).

The Radlett batsmen were up for the chase down but in the end fell too frequently. Radlett No 3 Kayani played some positive strokes, especially off Waters, but injured himself going for a quick single and went off. He came back on later in the game but had such restricted movement he was dismissed very cheaply. But, Preston needed to be mindful.

Radeltt’s stalwart Robinson also threatened with some classy shots but top edged for 19. Warne at the end also hit 28 but ultimately 289 proved to be too much with the Radlett middle-order failing to build on double figure starts.

Preston’s Charlie Bruce and Louis Harrington-Smith bowled well at times and took home the spoils with 3 wickets each as Radlett were all out for 207 off 41 overs. Too many 4 balls from the Preston attack but a hugely positive batting display from a gritty and determined Preston order.

Big positives to go into the final game of the 2016 season against high riding Leverstock Green next week.

Preston 3rds sealed the Division 10B title with a comfortable win away at Bentley Heath 2nds, their tenth in a row and their 13th from 15 games.

The home side won the toss and elected to bat on a freshly prepared pitch that none-the-less played pretty well throughout the match. Bhav Patel and Iain Purton were soon among the wickets, as was the returning Iain Williamson when he replaced Swampy. Despite the Threes again shelling several catches, after 25 overs Heath were 55 for 6. Their tail-end then decided to simply block out. After a long period of not much happening, three wickets fell in 6 balls, before the last pair put on a few at the end.

The final wicket fell at 114, with one ball left in the innings, and it would be fair to say that Patel, Purton, Hamilton, Williamson and Mercer (T.) were far too strong a bowling line-up for their opponents. 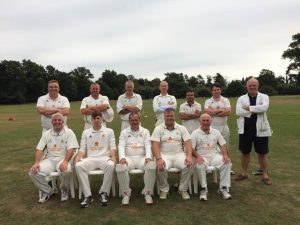 Matt Burleigh crashed a couple of square cuts before nicking a good delivery to slip, where the fielder clung on to it between his thighs. This was in fact the last act of the fielder’s career, as he was calling an end after 30-odd years, and his bad back forced him off shortly afterwards.

Richard Gatehouse gave his customary chance on 0, but the catch was dropped and The Gate proceeded to cream some lovely drives through the covers on his way to a rapid 35. At the other end, Dean Johnson was quietly collecting runs, with the odd chip over the top of cover. After the Gate departed, Greig Hearne didn’t last long, but fit again Nigel Biggs got his head down and added 50 with Johnson.

Dean fell with just 4 needed for the win. Like Dennis Compton at The Oval in ’53, skipper John Garnham swept the winning boundary and the ghost of Brian Johnson could be heard across the outfield:

“Is it the Title? Yeeeeessss, Preston have won the Title!”

The skipper returned to a hero’s welcome and a bucket of cold water, and the celebrations continued long into the night at The Chairman’s party (see Facebook).

The Thirds will be promoted two divisions to 9B, although there is still a game left next week at Whitwell against Old Elizabethans 3rds. 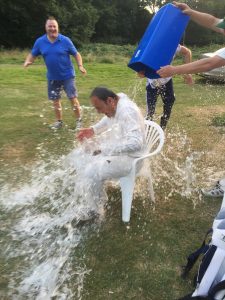 The victorious skipper gets a soaking

Preston 4ths welcomed Letchworth 5ths to Whitwell on Saturday and took first knock, posting 201 for 2. Dave Saunders led the way with 85 that included 4 sixes and 12 fours. Neil Pomeroy made 45 not out, and Chris Newell 40. However, this proved to be a short measure as the visitors sailed home by 7 wickets, despite a frugal 8 overs from Graham Hull and a prize wicket from Ray Williams – 12 points gained.

Preston Sunday 1st XI secured third place in their inaugural season in the Bedfordshire County League Division 2, after Justin Powick crashed his 6th Beds league century of the season, and 9th in total.

The Sunday 1st XI hosted Clifton CC in their final game of the season in the Bedfordshire league.

After some mild celebrations at Mr Chairmans’ the night before, a bleary-eyed Preston were praying for captain Liam Kenna to win the toss. The toss was lost and a long day in the field was feared.

Keen falconer, Ollie Gallimore and the effervescent Mark Waters opened up and made some early inroads, both bowling with great flight and guile, Waters winning the battle 3-1.

Kenna then turned to spin in the form of Pete Murrell and new best friend David Fleckney. Murrell, in a Samson like performance, struggled to take a wicket without the captaincy and was replaced by the Cobra, Mark ‘Spermy’ Smith. Mixing up his pace from slow to even slower, Smudge ripped through the Clifton middle to lower order, one LBW, one bowled and one expertly grabbed by the ‘grabber’ Callum Blair.

Fleckney and Murrell cleaned up the last couple, Muzza getting a leg-side stumping off Kenna that I think, I’ll have to check with Bomber, broke the speed barrier (either that or the batsman’s foot never left the ground – Ed.).

The Peas went out to chase the below par score, with one eye on the impending rain. Justin Powick, struggling with a bad back after carrying some drunk home the night before and the in-form (ahem – Ed.) Dr. Matt Burleigh opened up.

Powick went off like a gazelle and Bomber started like a tortoise with a sprained ankle. Powick bringing up his 50 without Bomber getting off the mark. Powick was two short of his 100 when Bomber finally departed for 12. Dean Murphy joined ol’ blue eyes and saw him through to his 9th century in a Preston shirt. Murphy departed with three runs required in the 20th over and fellow 4th teamer David Kay, swept his first ball for four.

Powick finished on 116* and Preston won by 8 wickets. A strong end to the Bedfordshire league, finishing in 3rd place. Refreshing also that the side featured players from all across the club.

Editor’s note – Justin had made 68 when Bomber finally got off the mark with an edge through the slips. This didn’t quite break the Bomber / Stefan Myburgh record, when Stefan had made 70 before he called for a suicidal single to spare Bomber’s blushes against Holtwhites in 2004. Myburgh made 200 that day, the club record score. Out of a partnership of 220. AJ Cook once went from 0 to 100 against Baldock back in 1991, while Bomber was basically stuck on 8. Bomber later celebrated by infamously dislocating his knee trying to sweep Tim Dean.