Preston 1st XI got off to a disappointing start in their 2015 Saracens Herts League Div 2A campaign with defeat by Watford Town. The match was also  Preston’s first 50/50 encounter of the new-look season. Preston were inserted on a damp but drying wicket with mixed overhead conditions and opened their innings comfortably. This serenity wasn’t to last too long, as a mix of poor shot selection by the batsmen and a controversial catch to dismiss the in-form Warren Hearne meant the innings kept having to re-start. But thanks to some lower order attacking to compliment a typically determined 50 from new skipper David Fleckney, Preston eventually managed to reach 150, which would prove to be a tricky target. 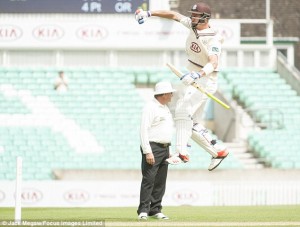 Hughes bowled exceptionally for his 10 overs showing great control of line and length and picking up 3 wickets. Veteran Mark Waters had Watford’s key batsman, Ravi Panchal, put down in the slips and was also denied a close LBW appeal.
Panchal’s class then shone through, taking his time building an innings despite being in danger of running out of partners at the other end. With Watford 8 wickets down, Panchal saw Watford home in the 40th over.

Preston 2nds league season did not get off to the best of starts as they fell to a comprehensive defeat to Watford Town 2nds. Losing the toss and fielding first, Preston looked like they could be chasing 300, but some tight bowling by senior players Andy Riant (0-31 from his 10 overs) and skipper Ashley Catlin (4-37 off 10) slowed the scoring down. Watford were eventually bowled out off the last ball of their innings for 245.  Preston’s reply never got going in the face of tight bowling and enthusiastic fielding, and it was left to Matt Burleigh to hold the innings together as he scored 45 of a feeble total of just 116.

Preston 3rds provided the club’s highlight of the weekend with a thumping victory over Hatfield & Crusader’s 4ths, lifting optimism for a successful season ahead. New skipper John Garnham made 76 and Louis Taylor a powerful 61 as Preston surged to 252 for 7 in their 50 overs. In reply, Hatfield were never in the running, falling to 140 all out with Mandeep Khurana taking 4 wickets.

Preston 4ths kicked off their season with a local derby against Hitchin 4ths at Hitchin Boys School. Hitchin batted first and at the halfway stage looked to be struggling at just 53 for 0 thanks to frugal bowling from Terry Neale and Chris Newell. However, with the two veterans having completed their allotted overs, Hitchin took advantage of very loose bowling from the rest of the attack to post a score of 246/4. This was always going to be a steep target and Preston finished well short on 154 for 7 to lose by 94 runs. Chris Newell was left undefeated on 37, with 31 by Terry Neale and 29 from skipper Dave Saunders.

On Sunday Preston entertained visitors JB Sports CC from north London. Batting first, Preston began slowly against tight bowling and some dedicated fielding. Skipper Pete Murrell upped the pace with a quick 20, before James Skirrow (60*) joined Matt Burleigh (50) in a big partnership characterised by some sharply taken singles, and a few close run out attempts. Ben Hill then entertained the small crowd by depositing an enormous 6 into their midst as Preston closed on 189 for 5. Having bowled well, JB Sports’ batting wasn’t quite as effective. Tom Maxwell took 3 wickets opening the bowling, and Mark Smith wrapped up the innings with 3 more victims to give Preston a comfortable 55 run victory.