Preston held visitors Watford Town to a draw in the teams’ second clash of the new format Saracens Herts League Div 2A season on Saturday. The toss was won by Watford and they decided to take first knock on a dry wicket.

From the off the Preston bowlers had their work cut out to try and bowl a consistent line and length and get something out of the wicket. Watford’s openers Piyori and Panchaal took the initiative to try and clatter Preston’s Aussie paceman Sam Crea with some hard hitting. Fortunately Crea’s new ball partner, Mark Waters, bowled a miserly spell and dismissed the Watford top 3 to return figures of 15 overs, 3 for 34. Watford’s middle order then steadied their ship, with skipper Hanif batting well for 50 before choking on a slow delivery from David Fleckney.

Also playing for Watford was ex- England international and ex- Lancs, Hamps and Worcs all-rounder Kabir Ali, cousin of Moeen Ali, who constructed a pretty innings of 63 before holing out to Warren Hearne in the deep. James Stevens (2 for 4) also bowled well in partnership with Fleckney (3 for 50 from 7 overs) to cause the lower order some issues. The Watford innings closed on 235 for 9 off their full 53 overs.

In reply, Preston’s reliable opener Warren Hearne once again looked comfortable to carve out a well made 50 before falling caught behind. Both Stevens Twins batted doggedly with James accumulating a sensible 21 and brother Jack punishing loose deliveries for 41. The middle order of Fleckney, Chris Cole and Crea also made good starts but with some good, tight bowling and very defensive field positions from Watford, life was just made very difficult for the Preston batsmen to go for Watford’s total. A few of the Watford players took things very seriously but some unusual fielding choices and bowling changes probably had most of the visiting team also scratching their heads at times.

The constant appealing also must be underlined. Spirited enthusiasm is one thing but some of this appealing was verging on the ridiculous with several breaths during one particular appeal, and appeals generally coming in from all corners of the ground. Arguably people in the Saloon Bar at the Red Lion had a better view at times. Crazy. Praise to both Umpires on the day for brilliantly controlling some hotheads towards the end of the game.

The game dwindled to a predictable conclusion of a draw with Preston gaining the upper hand on the day in points, ending on 189 for 6 off their allowed 47 overs. Preston now sit in 5th in Div 2A and look forward to their second game against Old Owens next week, with the back half of the season shaping up for some important games.

Preston 2nds’ poor run continued at SHCL Div 5A leaders Watford Town. Preston lost the toss and fielded first on a very dry wicket. Watford’s top order were kept reasonably quiet and when they fell to 81 for 4 Preston harboured hopes of dismissing their hosts for around 150. But a dropped catch and a fine counter-attacking 50 from Watford’s overseas player Sparsh Jain allowed the home side to eventually declare at 221 for 7. Nick Jones (4 for 53) was the pick of Preston’s bowlers.

Preston’s fears about the wicket were soon realised. After the openers were dismissed cheaply, Watford turned to the excellent left arm spin of Sparsh Jain, who proved almost impossible to play. Bowling with pace and control, Jain extracted considerable bounce and turn that would have troubled players of far higher standard. Indeed, it often proved too much for Watford’s army of close fielders, who missed numerous chances. But Jain bowled enough wicket taking deliveries to decimate Preston’s order, and his partners at the other end also cashed in as Preston’s batsmen sought relief and runs.

Only James Skirrow, in perhaps his breakthrough league innings for Preston, coped with the pitch and the bowling with a quite brilliant innings of 59. Skirrow’s skill and maturity against high class spin on a classic “bunsen burner” greatly impressed and shows huge promise for the future. Skirrow’s downfall attempting one cut shot too many quickly led to the end for Preston at 113 all out.

Preston 2nds now drop into the relegation zone of Div 5A, but James Skirrow’s innings perhaps points the way for our younger and older players to dig deep and fight for survival as we progress into the second half of the season. 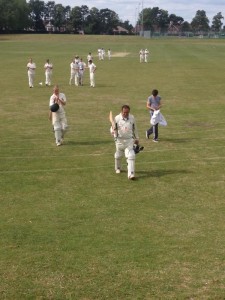 Preston 3rd XI’s batsmen enjoyed their day out against struggling Hatfield Crusaders 4ths at Hitchin Boys School. Martin Pierce smashed his way to 87, and skipper John Garnham’s fine form continued with 125 not out as Preston raced to 284 for 3 declared after just 43 overs.

The visitors stood no chance of overhauling Preston’s total, and were dismissed for 178 after 37 overs.

Preston 4ths took first knock in their derby game with Hitchin, and made 192 for 7 in their 47 overs. Peter Robbins top scored with 73 and Dave Saunders returned to form with 57. But in an exciting finish Hitchin got home by 1 wkt in the 40th over, Terry Neale taking 3 wickets as the 4ths managed to secure 19 bonus points.

Preston’s Sunday 1st XI fell to defeat against Harrow Town at the Field of Dreams in their latest Chess Valley League game. With only skipper Pete Murrell available from the Saturday 1st XI, Preston’s batting was missing some experience but none-the-less they still managed to carve out a respectable 181 for 8 from their 45 overs, against some tight slow bowling from the visitors’ youngsters. The innings was held together by Matt Burleigh’s 71, but James Skirrow continued his fine weekend’s form with 40 in a partnership of 68 with Burleigh. Then young Will Mercer underlined his huge improvement this season with an excellent 24 to boost Preston’s total.

Unfortunately Preston let Harrow’s batsmen get away to a fast start with some rather loose bowling. Led by the skipper, Preston managed to drag Harrow back to 91 for 5, before the visitors knuckled down to knock off the remaining runs by the 39th over.