Preston travelled to Old Owens for a top of the table clash and were asked to bowl first on losing the toss. New ball bowlers Casey Hughes and Seb Walton Adams bowled with aggression and skill beating the edge with frequency and seeing two go down early on. Walton Adams struck first, dismissing Ralph Lane caught at the wicket for 3 before sharing another two wickets with Hughes leaving Owens precariously placed at 34 – 3 in the 13th over. In form Peter Murrell (4-38) then took over from Hughes and set about bowling with great consistency and threat, taking wickets at regular intervals and spurning any chance of a major partnership. Once skipper Bradley Lane had thrown his wicket away to the occasional bowling of Fleckney, Preston looked set to chase a very gettable 158 off 51 overs.

Openers Powick (28) and Lincoln(8) got off to a flyer scoring 35 off the first 4 overs before both falling in consecutive overs. Preston’s middle then tamely collapsed to the spin duo of Sibley and Hamed with only Jack Stevens (20) and David Fleckney (23) showing any fight. The away side were bowled out for a very disappointing 126, handing maximum points to Old Owens.

Preston 2nd XI fought back for a well earned victory at home against Hatfield & Crusaders to maintain their fourth position in Div 5A. Callum Blair was in particularly fine form as Preston reached 188 for 9 in their 53 overs. The visitors got off to a good start and looked favourites to win as boundaries flew. But Ollie Gallimore kept a tight line at one end to pick up 4 wickets, and the introduction of leg spin from Charlie Bruce together with skipper Ashley Catlin’s slow darts forced a succession of errors from the visiting batsmen. Alf Rehman took two great catches as Preston’s fielders provided great support to the bowlers, cheered on by the returning 3rd XI players. Charlie Bruce also finished with 4 wickets as H&C were dismissed for 153.

The Third XI’s fight to gain promotion from Div 10B received a big boost on Saturday.

The team travelled to Flamstead to take on their 2nd XI, who were very weak and understandably chose to bat on winning the toss. As usual, Bav Patel and Iain Purton gave hardly any runs away, and Swampy cleaned up one of the openers with a jaffa that swung in from outside the left-hander’s off stump to clip the top of middle. Iain Williamson replaced Bav and straight away got among the wickets. The batsmen seemed intent on giving Preston catching practice, and Skinny soon had 5 for 20 from just 7 overs. George Constantinidi came on at the other end and picked up 3 for 19 in 4 overs, and Ian Hamilton took just one ball to finish the innings. Flamstead 2nds had sunk to just 85 all out. 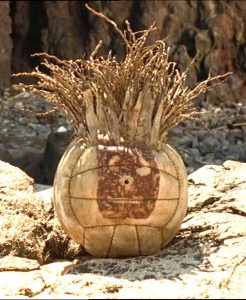 Will “Wilson” Mercer’s Tour hangover seemed to be clinging to him, and after watching two exceptionally gentle deliveries float down, he lost all patience and holed out to mid-on for a duck. Matt Burleigh (32) and Dean Johnson (36) decided to pat back the straight ones and whack the wide ones to the boundary, and added 71 before both fell in quick succession. Bomber launched one straight up into the stratosphere and one of Flamstead’s very young juniors held on to an exceptional catch over his shoulder, running away from the wicket. Richard Gatehouse (12*) and George C. got in some quick batting practice, and Preston had won by 4.30pm (including the tea break).

As the saying goes, all you can do is beat what is in front of you, but the Thirds incentive to get promotion is plain. Unexpected good news then arrived that previously unbeaten league leaders Old Albanians 3rd XI had lost to Northwood 3rds. Preston face OAs next week and the possibility of winning the division outright has now opened up….

A much depleted Preston 4ths entertained Reed 4ths on Saturday at Whitwell. The visitors were invited to take first knock and set a target of 180 after Preston’s bowlers contained them well. Jason Williamson took 2 catches and 3 wickets, and then hit a neat 17* at the end as Preston drew the match, finishing short on 157 for 5. Chris Newell top scored with 45, and next best was 36 from Steve King.

Overseas Justin Powick, missing through a back injury breakdancing the night before, was replaced by a press-ganged Casey Hughes, who happened to be picking his car up from The Red Lion.

A strong enough Preston side had first go on a lively looking track. Sir Matt Burleigh and Daniel Plumb took to the middle and both looked in fine form against all-be-it gentle bowling (errr, no it wasn’t! – Ed.). 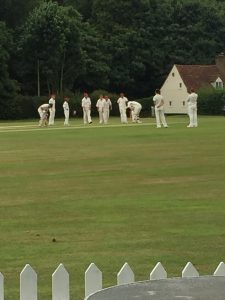 Bomber in a spot of bother

The first ‘breakthrough’ came in the 6th over when Bomber tried to work one through the leg side and it nipped back, crashing straight into Bomber’s unmentionables and smashing his box, forcing the big man to retire hurt and dip the old fella in some ice. 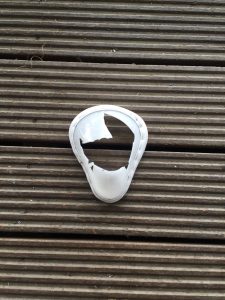 Callum Blair replaced him and settled in with Plumb. Blair was in fine form with a quickfire 37 before again being trapped LBW. Louis Harrington- Smith went first ball and so did Will “Wilson” Mercer, to complete his weekend’s pair, and leaving Preston 100-4 and the lower order searching for a re-inforced box.

Casey Hughes and Liam Kenna survived until drinks and a much needed break and re-grouping. So much that Bomber sat down on a chair and it collapsed underneath him.

Hughes fell victim to another LBW and Max Anderson was out without troubling the scorers. Kenna went in Kenna fashion, clipping a full toss straight to midwicket. Pete Murrell steadied the ship before he and a grimacing Bomber were out leaving Ollie Gallimore stranded at the other end.

A fantastic Mrs Burleigh tea was enjoyed and Bomber was deemed fit to take to the field even though he asked if he could reduce the pain but keep the swelling.

Hughes and a rejuvenated Gallimore opened up. A violent two over spell of speed and bounce from the human doodle pad rendered Gallimore pedestrian at best. Krones had the last laugh however as Hughes fell fowl of his own glass ankle after four overs.

The spin brothers from different mothers (and fathers) Anderson and Murrell did their best to slow up the chase, Anderson bowling quicker than half of the opening pair, getting one to lift and catch ‘keeper Kenna square in the face. The Welshman had to leave the field to be replaced by Plumb. There was more spin introduced in the form of LHS and the Batchelor George Constandopolous.

A very Preston-like mid order collapse from the visitors and gave the villagers some hope, but the modest total proved too hard to defend with Caldecote chasing the target with five wickets remaining.

A down beat and wounded home side returned to the pub, although confusion and panic set in when Kenna could only find one ice pack after the game, the one on his face, much to the amusement of a grinning Bomber.

The boys then set off for a post match curry. Let’s hope Bomber settled for something mild otherwise once more he could be struggling both ends.

Preston Seconds travelled to play the Blues at Fairfield with the Blues fielding what seemed a team of Preston players plus an interesting guest. The P’s lined up was made of a some under 12’s, a newly anointed doctor of philosophy, a few old timers from tour, plus Oggie, Tommo, Bav and a Dad. Losing the toss we were asked to bowl and Purts and Bav beat the ball on numerous occasions but for no luck. Purts then dismissed the opener and this brought the guest to the wicket. Although Purts beat him a couple of times he decided to slog everything to leg off whoever bowled, giving chances on the way. His 100 came off 44 balls, with the total on 175 off 26 overs. The boys then turned things around as the game went back to normal. Tommo took 2 wickets, Smudger bowled a tight spell and Dad Graham Munson took 1 for 9 off 3 overs to restrict Blues to 230.

Opening up the inexperienced Jack Munson and far too experienced Glen Thompson put on 45 in 13 overs before Tommo was snapped by the guest off Preston under 10 player Arham. Jack and Captain Cat put on 70 in quick time with Catlin retiring on 50 off 30 balls to allow others to bat. Junior Cat came to the wicket and hit a couple of impressive drives and with his mate Jack looked comfortable before Jack was caught for an excellent debut 40 off another Preston player, Attiqur. Olly C soon went for 12 and Oggie came and went to leave us needing 120 off 11 overs. The Blues were worried so introduced the guest, bowling gentle leggies, but Gambo and Purts decided to smash the ball everywhere, posting a stand of 90 in 10 overs with the Chairman getting a 30 ball 50 including a couple of huge sixes.

Gambo fell LBW to Tom Maxwell – you guessed it another Preston player- and Bav entered the arena. With Purts in company Bav took us to needing 8 off the last over. With all results possible the guest was asked to come back and bowl what he normally does in the Nottingham Premier – very fast – and it turned out to be too quick for our lads as we finished 5 short. A good effort by all. 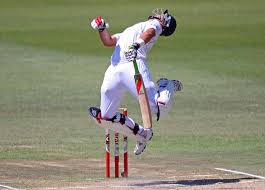 Swampy facing the final over on Sunday