A first for a few of us.  The President, the Chairman, the Chairman of Cricket, Skipper and Match Manager all commented on the fact that not one of them had ever played at Kimpton.  A village all of 6 miles from Preston, and not one of us had ever played there – well over a century of involvement in local cricket and not one of us ever had! Macca said he had but we didn’t believe him. A picturesque ground on top of a hill with the lovely village of Kimpton below us to the right hand side complete with Samuel Palmer-esque Church spire peeping above the oak trees. A picture.
Preston were inserted on an unavoidably damp wicket and it played a big role in the game, proving to be quite “tasty” with balls rising excitingly at times off a good length. So after opener Big Jon Skirrow gloved one to the keeper, we sent Smudger in. If ever the celestial Host and his planets were lining up for Smudger’s first 50, today was the day. If he had made contact with every ball he swung at he would have reached 420 quite quickly – but he didn’t.  He ran up and down with his Desmond Haynes-like “Gu on, GU ON!” calling and took some body blows well; at times slightly reminiscent of Sgt Elias hailing a helicopter in the final few scenes of Platoon. He finally fell for 26 having smeared it mainly through the mid-wicket / square leg area, much to the consternation of Kimpton’s “quicks”.

Young Will Mercer tickled a few doggedly and Waters, having received an over of brutal and targeted “chin symphony”, succumbed to one of Whitwell’s wiley left arm rounders for 21. Fleckers wasn’t going to let the Kimpton spinners, particularly Sav Balac from one end and a Jeremy Spake from “Airport” look-alike at the other, get the better of him and batted for a hard won 50 supported by Mad Dog Allen, who also had some fun for 26. Preston’s innings after the 40 finished on 166. 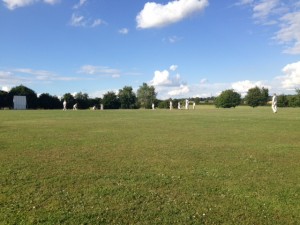 Skipper Fleckney threw the ball around and opened with Macca and Rupert. Macca bowled well without much luck apart from a well snaffled gloved catch behind the sticks by George Gambo. Rupert was licked all over the park unfortunately, but the introduction of Mad Dog Allen and particularly young Chris Willis, playing in his first ever senior game, started to put some brakes to the Kimpton innings. Willis clean bowled their danger man, who had presumably left the gas on at home since he was quite keen to get proceedings over and done with. Chris’s success brought a resounding cheer from the Preston President, Chairman and Vice-Chairman and the Preston spectators, welcoming him into senior cricket.  Willis bowled very well in his 4 overs and young Jake Cook also bowled with great composure and direction when introduced into the attack, if a little short of times but took a great wicket LBW and given by their umpire.  Waters bowled like a drain but a direct hit from cover for an important run out made up for it – sort of. This was going to go to the wire.  If Macca could catch Jeremy Spake would have been walking back early-ish in his innings but instead he did his pads up and took his guard for the 57th and final time and he somehow hooked a Waters effort-delivery in the final over off his nose for two to bring victory for the Kimpton side.

A very enjoyable game – with a few players taking it slightly more seriously that was really necessary – but I hope in future we may be able to organise a few more friendlies of this nature to help us bring our “junior seniors” into the adult game – all in all a great afternoon and a huge pleasure to see to young guns getting stuck in.

Jeremy Spake explains to our reporter where he’s going to hit the next ball.