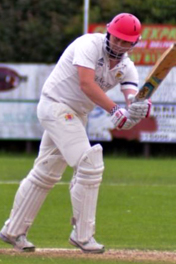 Blake Mills (23) is a seam bowling all-rounder who is currently into his fourth season at Casey South Melbourne Cricket Club in the Victorian Premier Cricket Competition. A country boy, who won numerous junior awards for Morwell Cricket Club in the Gippsland region of Victoria, represented the Country junior and senior association sides prior to joining Casey in 2013/14.

Since his arrival, he has been a notable performer, predominantly in the 2nd Grade, albeit with three 1st Grade appearances in 2015/16. At the point of writing, Mills is on the verge of the 1,000 run, 50 wicket double for Casey, averaging 24.45 and 25.50 with bat and ball respectively.

Over the past two years, Mills has also played cricket abroad, firstly in Scotland (Stoneywood-Dyce) and England (Ramsey). Playing as the 2nd XI overseas player (the 1st XI already had a registered pro), Mills absolutely excelled in the Strathmore and Perthshire Cricket Union (Division 1) averaging 55 and an incredible 4.2 with bat/ball. Last summer (2016), he played across the top two sides and, in 29 league matches churned out 1,121 runs at 59 (4x100s) alongside 31 wickets at 23.16 (199 runs at 28.43 / 11 wickets at 25.73 in Saturday 1st XI cricket).

Wishing you all the best during your stay with us.